Parents are always looking for ways to keep their babies safe and healthy. Perhaps this is why cloth diapers have made such a drastic come back over the past few years. Parents are once again realizing how much healthier these are for not only their precious little ones, but also how they spare their wallets, and the environment.

Its Better on the Booty

While disposable diapers may seem quick and convenient, they actually contain harsh chemicals that can irritate your baby’s bottom. Because disposables hold more, parents are more likely to change them less often, leaving baby’s bottom in a mess for a longer period of time. Cloth diapers show wetness faster, and therefore get changed more often, leaving baby’s skin nice and dry. Baby’s that wear cloth diapers are less prone to skin irritations such as diaper rashes, and tend to be less cranky because these won’t be as tight on baby’s legs or bunch up on them.

Parents often forgo cloth diapers because, at first glance, they seem much more expensive. When you are standing in the grocery store, it seems logical to go with disposable ones. You can purchase twenty-four to thirty-six diapers for eleven to fourteen dollars. A pack of twelve cloth diapers cost twenty dollars. When you look at it like that, it seems reasonable to go with the disposable diapers, because you get more for your money… Right?

Not quite. Yes you may get more diapers for your money right that moment. But these disposables are one time use only. So you have to continuously buy more, and baby’s use a lot of diapers. So you are spending eleven to fourteen dollars over and over, whereas for that one time cost of twenty dollars, you have received twelve cloth diapers that can be use over and over again. Now which seems like the better option?

Parents do shy away from cloth diapers because they wrongfully presume they are hard to clean. A disposable is much easier; you just toss the mess into the trash. But cloth diapers are just as easy. You simply dump the solid waste into a toilet and flush it away. Toss the cloth ones into the washing machine with some baby friendly laundry detergent like Dreft, and add a small amount of vinegar. Using cloth diapers cuts down on odors as well, since you aren't tossing dirty disposables into the trash anymore!

Parents of toddlers who use cloth diapers say that their child often potty trains quicker and before disposable diaper toddlers. This is because the cloth ones aide parents in teaching children elimination communication. Because your child will be able to feel the wetness when they use the bathroom instantly in a cloth diaper, it is easier for them to associate the urge of having to go.

Many trendy moms like cloth diapers because they do come in trendy little designs, colors, and patterns. While not every woman is concerned with their baby being a trendsetter, all women do like things that are viewed as “so cute” on their baby.

Better for the Environment

Whether cloth diapers are better for the environment is a topic that was greatly debated for a while. The general conclusion is that while disposable diapers take up space in a landfill, and take years to break down, cloth ones are reusable and recyclable.

If you are a parent who wants to do the best you can for your child, then take a closer look at cloth diapers, and at least give it a try. Your baby will benefit, your wallet will benefit, the environment will benefit, and you may even save gas in your car since you will no longer have to make a special trip to the store for diapers!

Do You Use Cloth Diapers on Your Baby 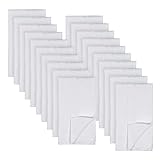