M. D. Jackson has studied psychology since 1989. While her specialty is family relations, she also loves neuroscience and behaviorism.

My brother was an amazing athlete. At one point in his basketball career he scored 56 points in one game by himself. He was rarely without a basketball in his hand. Yet, my parents never went to his games. This negatively effected his self esteem and to this day I believe it is part of the reason he never went onto play college ball. Later in life i had a conversation about this with my father. He said when he was growing up, parents didn't come to the games. From the age of eight my father rode his bike to the baseball field for practice, on Saturday he got himself ready and went to the games alone.

I mention this because attitudes change over time. What was the normal behavior in one generation changes with the next. I cannot imagine my son at eight going to the field alone. The reason I cannot imagine it is that we have all learned of the rampant sexual abuse of kids in our country. My goal as a parent was to get my kids to 18 without an incident that would screw them up for life. Maybe that is why parents started taking a sideline seat at games. Maybe that is why we packed around folding chairs for years.

Somewhere along the way we lost sight of the reason we put our kids in sports. It became ultra competitive in an unhealthy way. Parents became like managers trying to promote the next Michael Jordan. Parents started to think of their kids as an extension of themselves, and after all weren't they winners? Didn't their kid deserve to play more than that kid who picked at the grass in right field or maybe was my dad half right when he said that kids should play sports because they want to play?

Mental Abuse on The Field

He was a twelve year old red head, and as he walked to the plate he already looked defeated. For along time he had been good friends with my son… until they ended up on a baseball team together. Recently this young red head had taken to verbally abusing his team mates during the baseball games. His behavior was so out of control that parents had started to complain to the coaches. I worked with his mother for years but, his father I met at the first practice. His father who stood on the sidelines yelling every time his pitch was too high or dropped short, his father who berated him every time he missed a ball.

This poor red head that would could never be good enough. He was one of the best players on the team and yet he would never know it. As I watched him strike out that day I felt bad for him because, I knew what would happen next. When the third pitch hit the glove his father started yelling from behind the backstop. One of the coaches was a good friend of mine and we had a long talk about this situation. I started yelling good things at this child who was carrying so much stress, anger, and anxiety.

The red head boy walked to the dugout and threw a bat in the dugout and started crying. Thankfully no one was hit and the boy sat in the dugout through the next inning crying. He had all he could take, parents were not allowed in the dugout and this was truly the only place the boy was safe from his father. I talked to his mother several times pleading with her to back her husband off her son, she just kept insisting that he wanted the son to be the best.

This was not the first time I watched a parent destroy a child over extracurricular activities. In the eight years I coached soccer, I saw parents get crazy screaming, berating and even punishing children for missed goals, lost passes, and losing a game. In that eight years I bet none of those kids remembered the games they won or lost. Yet, few of the same kids will ever forget how horrible their parents were to them.

Most kids playing sports will never make it onto a college team. That is a reality. The few who do make it to college level sports will probably never be drafted professionally. So why do parents insist on terrorizing their children over sports? Because parents believe a child’s success is a reflection of them. Children are not successful in life because of parents. At some point a child takes responsibility for themselves and makes their own decisions.

There is something to be said for a parent who raises a child with morals and teaches the child to have the right attitude. Regardless of who that child becomes, life is going to kick that child around. The best thing you can teach them is to keep a good attitude and never quit. When parents over emphasize sports or other activities as defining a child as a winner or loser, they are setting that child up to be unhappy. Our local Baseball field put up a sign that said "There are no college scouts here today, be positive and let the kids play".

Sports Are a Life Lesson

Sports and other activities are important because, they teach children to work as a team, they teach a child how to take a loss and enjoy a win. These activities are important for social development. Sports should be fun for the child. That’s right fun! Not a dredge, not a nightmare not something they are forced to do…but a fun activity where they can burn off some energy. Parents who take activities too serious are setting their kids up to fail. At some point most of these kids are going to rebel when they realize they can’t please their parents.

The missed catch, short throw, and low pitch are not nearly as important as a child. I have told my son over and over that he needs to play the game because; the game is fun not because I want him to. I hope he teaches his own sons the importance of giving sports your best effort and the importance of enjoying the game. Watching my kids grow up I realized that fifteen minutes after a game the kids forgot all about losing or winning, because after all …they were just kids.

How to Know when a Parent is Going to Far

How do you know as parent or coach when the behavior has gone too far??

If a parent is completely unreasonable and out of control then they should be banned from the field. (we had to do this one year with a father who was cussing at players) If you are the parent who is out of control, seek counseling. Chances are good that you have some issues that you need to work through.

Maturity Allows Kids to be Kids

There is a level of maturity that is required to raise good kids. We all should know that for the kids, this is a game. Sure there are potential superstars in little league, there is plenty of time for those kids to feel the pressure of striking someone out or hitting the ball over the fence. Below the age of 13 these are kids playing. If you see potential in your own child then I would find positive ways to promote furthering the child's skill. However, I would not make it an obsession. As I previously stated my son played baseball. He was really good and with a little practice could have probably obtained a college scholarship. When he was 14, he watched a coach and a parent almost get into a fist fight on the side of the field. I was very sorry I almost hit the coach. I'm just kidding it wasn't me, it was his friends father. That incident led to my son quitting baseball. It wasn't fun anymore. The parents took all the fun out of it. That was the last day he stepped onto the field. I'm not going to lie, I miss watching him play. He has grown up to be a good person with a strong moral character. I think some of that he learned playing baseball. Hopefully he has good memories of his childhood games. 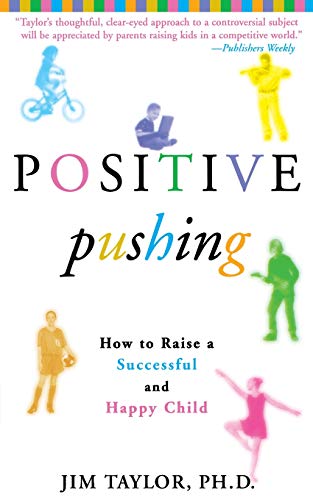 Positive Pushing: How to Raise a Successful and Happy Child
Buy Now

What was your experience with having parents attend your sports events?