Peachpurple has two kids, a teen and a school age kid. She had been through tough parenting and learned a lot of tips and tricks about kids

When my toddler was one and a half years old, I started to dig out my older daughter’s pre-school books. To be honest, I had kept the books very well by covering each book with plastic wrapper so that the silvery book worms won’t be able to chew off the pages. Hence, the pre-school books were in readable condition and there were no torn pages.

As soon as I introduced them to my toddler the alphabet books, he wasn’t keen in to listen nor look at the books at all. He was more interested in flipping through the pages and snatching them from my hands.

Don't give up on the child. Give the child an education. Give them daily love.

How long do you spend with your toddler at home?

Don't give up easily

I didn’t give up trying though as I knew my toddler was still listening to my alphabet reading, even though he was either playing with his toys or gnawing off the book pages. It may be a little early for him to get in touch with alphabet books but I believed that he was constantly listening, he may absorb the sound of alphabets and remember them in his memory bank.

The best method to teach your toddler alphabets are to make learning fun and part of daily activities involved. If your toddler shows no interest in alphabet learning, it is advisable not to put pressure on him because it may irritate his mood and he will gradually dislike learning process. Let it go for a few days or weeks, then try again when he shows interest in flipping through the educational books or he might surprise you by chanting the alphabets unknowingly.

When my toddler was two years old , he automatically started to sit on my lap, opened up an alphabet book and started to read after me.

At this age, most toddler started to recognize some of the alphabets and numbers with much interest.

For example, I would begin like this, ” A is for apple. Ap-ple, Apple, crunch , crunch, crunch, yummy apple !”, while I pretend to eat an imaginary apple with funny actions. Thereto, I say, “Say A”, and I let him say the alphabet at his own pace.

Toddler at the age between 2 and 3 are very keen and fascinated with cards, papers, glue and scissors.

They love to touch and meddle with these stationary items as they are starting to use their sense of touch and motor skills.

Let your toddler touch these items except the sharp utensils.

Keep them from his reach for he may hurt himself and explain why he cannot touch them.

Here, I made my own alphabet flash card with unused card boxes from my toddler formula milk powder and cereal paper boxes.

Let your toddler help you by arranging simple tasks for him to do within his ability. I let him to do the pasting job and throwing away rubbish into the wastepaper basket.

He loves to throw, I think it is fun for him.

How to make Alphabet Flash Cards

You need these items

Photos for Things You Need To Prepare

Methods to make the flash cards..

Cut open the cardboxes as many make as possible because you need to make 50 pieces of round cards, 25 alphabets, one for the alphabets and the second for the pictures. If you don’t intend to make so many right now, make 5 alphabets instead, so you need 10 round pieces.

Draw and cut out the circles

To Play The Flash Cards

This game is very easy and fun for toddler who loves to seek and find things.

Remember to give your toddler lots of praises when he gets the right answer because your moral support is what your toddler needs, refrain from scolding him.

Control your temper when you are in front of your toddler for he is good at imitating your actions and words. 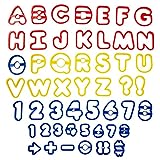 Alphabet cookies and biscuits are easily found in most hypermarkets and grocery stores. They are sold in butter and chocolate flavor which are the best hit among children. Purchase your toddler favorite flavor so that he will be interested in learning the alphabet is a fun and challenging way with delicious reward waiting for him; eating up the right answered cookies.

However, too much cookies will invite cavities to form in between his teeth and affect his appetite during mealtime. Therefore, I do not play the alphabet guessing game everyday, alternate days instead.

On the other hand, if you have time at home, purchase the alphabet cookie cutters from hypermarket or bakery shops and bake some low cholesterol and low sugar cookies for your toddler. Do not bake all 25 letters at once because he might be able to remember them all at once. I would advise it would be a good idea to bake the first few letters and stamp out 3 to 5 sets for each letters. Store the cookies in airtight container.

How To play the alphabet guessing game

Spread out 3 to 4 different alphabet cookies on his flat plate or paper towel.

Instruct your toddler to point out which is the alphabet “C”.

If he points out correctly, let him eat the letter “C” only, as a reward.

Do remember to give him a few sips if water, NOT sweet beverages, after eating each cookie. Cookies and biscuits are dry snacks which often choke little children throats.

If your toddler points out the wrong answer, do not let him have the cookie. Thereto, he will work harder by concentrating on the right answer. Eventually, his memory skill will improve tremendously after numerous attempts.

Word of Advice From The Author

Each toddler alphabet learning ability is different from older children. Hence, do not expect full mastery for a short period of time.

Related Hubs to Toddlers and Kids