Having Twins - Not Knowing Any Different

When I found out that I was pregnant with twins I was ecstatic. My father had twin brothers so I was not surprised, as I always knew that there was a chance that I would have twins.

Having twins has been wonderful. So many people ask me how did you ever cope with two babies at the same time. This was my first of two pregnancies and being a mom for the first time I really didn’t know any difference between caring for one baby or two. As I look back to when they were first born I suppose it was double the work, double the feedings, double diaper changes, double the costs, double everything. But you just do what you do and carry on as if it were a single birth.

Feeding Twins at The Same Time

I am glad that I had the twins first as if I had had my third son first then the twins I may have found it overwhelming. We had my brother-in-law living with us the summer that the boys were born and this worked out quite well when it came to feeding time. My husband and brother-in-law would do many of the late night feedings so that I could catch a few extra winks.

With all three of my boys I hit the jackpot as far as sleeping through the night goes, as by two months old they all slept right through.

Unfortunately I was unable to breast-feed and making up bottles did take up a lot of time during my day. In order to feed both boys at the same time when I was alone with them I would always have a car seat close by. One baby would go in the car seat sitting on the floor in front of me with receiving blankets rolled up to prop up the bottle and I would hold the other baby. Then the next feeding I would just alternate babies. This worked quite well.

Grocery shopping was always a challenge. I went alone one day by myself and found it a bit overwhelming. I took two grocery carts putting a baby and car seat in each cart and pushed one cart while pulling the other. I only did this once as it took me forever to get through the grocery store. After that I would ask a friend or relative to come along with me.

All bundled up and ready to go.

When out in public pushing a twin stroller so many people would stop and ask me “Oh are they twins” At first it made me feel special but then after awhile it got to be a bit much. Even though they are not identical, when they were babies most people could not tell them apart. So after a few months of hearing “Oh are they twins” I just wanted to say (although I just bit my tongue) Well what do you think? Do they look like twins to you?, Can you tell them apart? I am not really sure if they are twins or not. Hmmm where did the other one come from? When I started my walk there was only one baby in the stroller. When my sister-in-law would be with me I always just wanted to say, no one is hers and one is mine.

"Who Needs Toys We Have Each Other"

When the twins were about five years old I walked into their room one morning and it was a total disaster. There were toys everywhere. Okay I told them it is time to clean up and put away the toys, and get a bit organized in here. Once you are done we can go to the park. A few hours had passed and all that I had heard coming from their room was laughing and playing going on. I stuck my head in the door and of course there they were in the middle of the room and the mess was even worst than it had been originally. I told them no park till this is cleaned up. The afternoon came and went, and my husband had come home for the night. I told him that I had asked the boys to clean up their room. He went to see if they had it completed yet. When he saw the mess he informed them that if they didn’t start the clean up that he was going to clean the room up himself and take away all the toys. An hour later all the toys were put into garbage bags and into the garage until a later date. The funny part of this is that the boys were not upset at all by this. They did not seem to care that all of their toys were gone. After dinner that night they both toddled off into their room and just sat on the floor talking and joking. We had left some paper, pencils and a few books in the room and they utilized those. As long as they had each other nothing else really mattered. After two weeks had passed we returned the toys to them but I don’t really think they really ever missed them.

Today they are 22 years old and they are still the best of friends. I have many stories and many wonderful memories about my boys to share, but for today I will stop here. Thanks so much for reading. 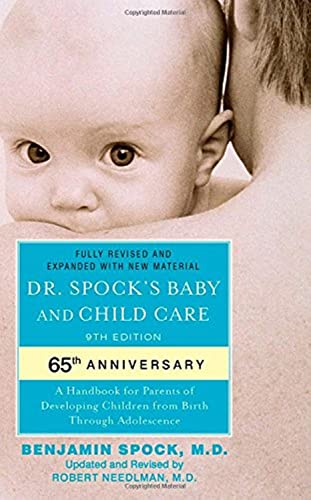 The one thing that was a great help to me when my twins were newborns up until they were five or six, was the Dr. Spock Baby Book. I learned a great deal from this book, and it very rarely was out of reach for the first year of their lives.

Do you have Twins or Triplets? 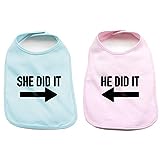 He Did It She Did It Arrow Twin Set Baby Cotton Bibs, Light Blue & Light Pink
Buy Now