The Greatest Love Ever

Welcome to my writer's den, home of a real artist, lover of of life, and all good people, places, and history. Thank you for being here.

A Passion For Shared Knowledge

Although Wikipedia has a wonderful technical definition of 'love', the Greatest Love Ever is far too complex for just one definition. This site, as with life and love, is a continual work in progress, beginning with a lesson of love.

"The Last Lecture." is but one example a teacher's calling, and their commitment to teach, and shared with his students the lesson of a lifetime.

The greatest love ever is the memory of one who has touched your heart in such a way it stands the test of time. It is the unbroken vow between a husband and wife.

It is the unconditional love of what a good Mother and Father feels for their child, and the living bond of love of a child for their parents and siblings. Also, great is the love between man and man's best friend, as more often than not, pets are part of the family.

The greatest example of love can be as simple as a Father who takes his kid's whole ball team to McDonald's even though they lost the game. It can be as complex as a Mother sharing her favorite secret recipe that was never written down,

So great is the love one feels with each memory of a loved one that has passed.

A Heart Filled With Song

It is said that music soothes the savage beast, and this much I know to be true. Music comes from within - whether it be a composition of a concerto, the bond between a person and their instrument, or the song one must sing in the shower, the essence of love and its ties to music is an amazing power.

The video of Susan Boyle has been shared more than 87 million times. When one has the love song in their heart, they live with the passion, and find a way to share it.

To Reach The Unreachable Star

The Art Of Love

Whether it be a painting, a sculpture, a building, a book or a blog, computer coding, mathematics, schematics, a cook or a cleaner, music or song - or the miracle of life, art is the passion of the heart. If you have the passion and love for what it takes to create a masterpiece, you are a living work of art.

The greatest love ever is the passion that drives an artist's ability to create. It is the bond a person has with their job. No matter how big or how menial the task, the person with the greatest love will do the task whole-heartedly with impeccable precision and self respect.

What would you do if someone you didn't know came up to you and asked you for a hug? What would you think of them? Would you run, or would you respond in kind? The Sick Puppies (band name) decided to take their question to the streets. The results are nothing less than what we already know: Everyone needs a hug once in a while. Human contact can be a good thing.

The Power Of Love

Each of us have our own heart felt interpretation of what the 'greatest love ever' really is. For most people, a pet is one of the family. I had the greatest love for my old blind dog, and was compelled to share what he taught me.

For The Love Of Freedom

The greatest love ever comes from people who have a desire to live free or die. My father's family are among the original settlers of this great nation. My many-times great grandfather served in the French-Indian War, and the American Revolutionary War. His family struggled and survived the trials and tribulations of history, including the Civil War. Whenever our country needed help in defending its freedom, my ancestors were there, and their love of country grew.

My Father was one of ten children. Out of the ten children, six of my grandparents children were members of the armed forces. Four members of the family served during World War II. My father's oldest sister was a sergeant in The Women's' Army Corps (WAC). His oldest brother was one of the Marines who cleaned up Nagasaki after the BIG bomb was dropped. My dad's older brother served in the navy as a cook on a ship that wasn't good enough to float. He ended up saving enough lives while under attack that he earned a commendation and was photographed being pinned by the President Of The United States. My dad's other older brother served in the Army. My father was a fireman in the Navy and was stationed in Guam during the Korean War. His younger brother served during the Korean War as a member of the Army.

Thanks to my family, I grew up with heroes. People who were honest to the bone, and who believed in protecting the freedom to speak, keep the faith, and live in peace safely and securely without persecution. My father worked with war heroes, and I met many of them.

I grew up among war heroes and survivors. The man who used to live across the street served under Douglas McArthur. The man who lived next door was under the command of General Patton. The father of one of our best friends was interviewed by Walter Cronkite. He was a Japanese prisoner of war. My aunt's husband was a member of the Air Force, and was stationed in Hawaii when Pearl Harbor was bombed. He was photographed by Ansel Adams jumping out of an aircraft that just landed. When we last spoke, he said Mr. Adams was not one to hob knob with the big wigs. He spent time talking with my uncle than he rather than the generals who wanted their turn.

The Greatest Love And The Test Of Time

My husband's father served during World War II, and was a member of the Army Signal Command. He was a decorated war hero who never fully recovered from his wounds. He fell in love with a beautiful girl in a land he fought to protect.

My mother in law grew up with the fascism of Mossolini. She hid with her brothers when Hitler's men knock at her mother's door searching for "recruits." She survived Hitler's occupation, and managed to sleep while bombs and bullets were falling around her.

When they came back home, they did not get a parade, and did not look for accolades. They went to work, built businesses, raised their children, took them to church, and survived at home.

By the grace of God, I met these people, lived with these people, learned from these people, loved these people, and more. Family members who did not serve in the armed forces, went forth and volunteered for community service, and got jobs that involved protecting their communities and their neighbors.

How much love do you have for your home, your family, your community, your country, or your freedom? Over the years, I have learned that this kind of love often involves total dedication, and always requires sacrifice. It takes the greatest love ever to live this life.

The Music Of My Generation

The Greatest Love Ever Involves Faith

No Greater Love Than This

Love And The Power Of Knowledge 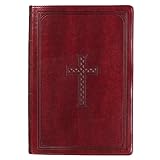 KJV Holy Bible, Super Giant Print Faux Leather Red Letter Edition - Thumb Index & Ribbon Marker, King James Version, Burgundy
The Holy Bible is often called the 'book of knowledge.' It.is a book of mystery, and a part of man's of history. The Bible is the book to read in moments of desperation to meditate in quiet ,with healing psalms of inspiration. For many people, the Holy Bible is the recipe book of life and the guide for how to live it. I've read the Holy Bible many times, and refer to it daily when possible. Whether one is a believer or not, it is a book filled with words of wisdom, guidance, and hope.
Buy Now

To Love And Be Loved

The greatest love ever can be as simple as being triggered by the aroma of the sweet soft scent of pipe tobacco, a warm cup of cocoa, or fresh hot coffee in the morning air, and the power of love is meant to be shared.