What are Good Baby Teething Pacifiers?

After letting our 2 chihuahua puppies visit our 10 month old grandson in the "playroom", I later discovered that Zach's "teething pacifier" had gone awol. This is not something pleasant to discover when the kid is about to go to bed at midnight (yeah I know it was late to have him up but what are grandparents for anyway?) Terror struck my heart to discover that the coveted binky was not only missing but could not be found anywhere. I knew one of the puppies had snatched it up - so in horror I ran around the house hoping to intercept the pacifier before any damage was done. No such luck.

After sending grandpa out to buy a replacement pacifier - only to have him return with the WRONG type of binky - I took another sweep around the house in agitation. This time I went outside where the little buggers had gone.

Sure enough, there on the couch sucking away on the prized binky was my other dog Karma, who had apparently intercepted the binky from the chihuahuas. With sad eyes Karma relinquished the binky to me and put her head back on the couch, watching me intently. Even though it was dark I could see that the pacifier was pretty much unrecognizable by now, having exchanged several sets of puppy teeth. It was obvious a replacement was needed, and fast.

So off I rushed Walmart at midnight to find another "teething pacifier" for little Zach (aren't 24 hour stores just great in these types of emergencies?)

To clarify for the record, this is not the first time we have had binky drama. A few weeks ago my birthday celebration got cut short when I had to make an emergency trip to bring Zach his binky so he could go to sleep (OK call him spoiled or whatever but this is a kid that HAS to have his binky, K?)

So I've been learning about teething pacifiers vs. regular pacifiers, why they are good and when to use them (hey I don't think they even had "teething pacifiers" when my kids were small but what do I know anyway?) So yes, when your baby is teething it is not only OK to give them a pacifier but it's even better to get them a teething pacifier. Why? Well the answer is kind of obvious....when you have little teeth like a piranha emerging from your gums, and they hurt like "h@@ll", yes a teething pacifier can make all the difference in the world. 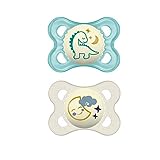 There are Many Types of Teething Pacifiers

I have come to learn that not only do teething pacifiers come in all types of shapes and sizes but they also help sooth your budding piranha's gums. On my midnight trip to Walmart I managed to find a teething pacifier close to Zachs by MAM, only without the little knobbies on it. The pacifier was close enough however to Zach's other one and he gleefully accepted it (relief!)

Zach's usual teething pacifier is also made by Mam, who has this to say about their pacifiers: "The smart design of MAM pacifiers makes sure it always sits in the mouth perfectly. MAM pacifiers are anatomically correct to allow healthy jaw and teeth development. For a maximum level of comfort for babies of all ages MAM designers developed pacifiers in different sizes"

I've also read some good reviews about the RaZ-Berry Silicone Teether which is a cute little teething pacifier that looks like a raspberry. In addition to teething pacifiers I also found some hilarious funny pacifiers that can make your baby look he has a full set of teeth (cute but I don't know effective they are)

If you have a baby that has emerging teeth I would highly recommend using a teething pacifier. From experience I can say that a teething pacifier definitely has a soothing effect on your baby and as MAM says, they are good for your babies developing gums and teeth. I know that my midnight trip to Walmart was definitely worth it, because a happy Zach makes a happy grandma!

(Dorsi Diaz is a freelance writer/publisher and proud grandma to Zach the Teether!)