An Accident-Prone Childhood | How Did We Survive Our Youth?

I don't know how so many of us managed to live through childhood. We thought nothing of eating dirt or dog food; we threw rocks at each other, and played football in the middle of the street. I remember climbing up high in trees, then leaping out to fall & roll in the grass. A little mud and a few bruises never hurt anyone.

It's a wonder we didn't end up with broken limbs, or even worse!

The Things We Ate

A few germs never hurt anyone!

My family liked to go camping. It was great to get out where we could sleep in the open, build campfires, and go fishing. On one such trip, my dad was cooking on the campfire, and a bit of dirt fell into the food. I exclaimed "We can't eat that!". And he replied, "It's just seasoning...."

As an infant, I carried a plastic lizard around in my mouth. My mother said she'd take it away from me, wash off the dirt, then give it back. I'd immediately put it back in my mouth, and crawl off. Like the campfire "seasoning", the dirt on the toy just added a bit of extra flavoring.

How to Eat Fried Worms
I never ate worms when I was a kid, but I did try chocolate covered ants! This is a story of typical childhood - a kid being dared to do something he'd rather not.
Buy Now

The first accident I had was when I was just 3 years old. My family was visiting our cousins at their house in a nearby small town. The adults were in the house, while all of us kids were playing outside. That's what kids did back then. We didn't have video games or computers. My 5 year old brother was riding a tricycle up and down the sidewalk, showing off how well he could ride.

The next thing I know, he dares me to ride the tricycle down the front steps of the house. I was too scared! So, he said "If you'll do it, I'll do it afterwards..."

So I did... ending up in the emergency room, where I got stitches in my chin. 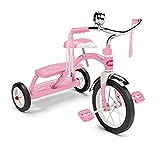 Radio Flyer Classic Pink Dual Deck Tricycle
My tricycle wasn't as fancy as this one, as it didn't have the tassles on the handles. This is one I wish I'd had way-back-when... and hopefully be smart enough to not ride it down stairs!
Buy Now

My second accident occurred when I was 6 years old. I walked to school every day with my next door neighbor, who was also my best friend. The school was only about 5 blocks away, past a few houses, and then a big, empty field. Our moms would stand out in the front yard and watch us walk the entire way.

Things were different back then. We didn't worry about traffic or child molesters. As long as we were in sight of our parents, we were safe.

But things don't always go as planned. One afternoon, when coming home, my friend & I decided to race through the field. I tripped, landing on a broken bottle. It tore a hole in my knee, and blood streamed down my leg. I limped home, and was taken once again to the emergency room. I got stitched up, then bandaged, and was told to stay off the leg until it healed.

A week or so later, we went back to the doctor to have the stitches removed. The doctor removed the bandage, then pulled on the stitches. It wasn't quite healed, and he ended up opening the wound once again. More stitches, another bandage, and stay off it another week!

The leg wound finally healed, leaving just a small scar on my knee. Which is still there, by the way. Along with the scar on my chin. Most sane people at this point would have learned that being reckless can send you to the emergency room. I suppose I was a slow learner.

The kids in our neighborhood loved to ride bicycles. There wasn't much traffic in those days, so we rode up & down the street. As we got older, we were allowed to ride around the block. We learned to do tricks, like "wheelies", and double up. Some even stood up on their seats, or let their friends ride on the handlebars.

I had just received my newest bike - it had a banana seat and big handlebars. It was purple, which was my favorite color at the time. I'd race my friends to the end of the block, then turn around & race back. Great fun!

But then, the inevitable happened. We decided on a new trick.. riding with our eyes closed. It was easy to do as long as we were going in a straight line. But turning around to come back? I slid in the gravel, fell on the concrete, and was knocked out! The next thing I knew, I was in the car, headed once again to the emergency room.

I managed to stay out of the emergency room for a few more years, until the infamous rock fight. The yards in our neighborhood all had chain link fences, and we played out in the backyards a great deal of the time. One afternoon, I went outside where my brother & a friend were throwing rocks at trees. Some friends a couple of house down came out, and decided they wanted to get in on the game. They began throwing rocks at our yard, and my brother & his friend threw them back.

It became an all-out war, and I was the loser. A rock hit me in the forehead, drawing blood & creating a huge knot. No stitches this time - just a butterfly bandage. And an apology from the kid that hit me.

I finally learned - somewhat - to stay away from things that could possibly cause me harm. I guess that is what you call "Growing Up". Or realizing that, in fact, we really aren't "bullet proof". It's a learning process, and one that I think all kids should experience for themselves. These days, it seems that our lives have become too sterile and too careful.

Sure, you may catch a cold if you don't wash your hands enough. And yes, you might just break a leg if you're not careful. But.... those scars you carry from your childhood adventures / accidents.... are definitely lessons to remember!

What accidents did you have as a child?