A Poor Man's Dish, but You'll Eat Like a King or Maybe a President

5 stars from 1 rating of Corn and Potato Chowder

Food for Just the Right Time

Have you ever noticed how some food seems designed for certain seasons of the year? Or, some food just seems like designated "holiday" food.

For example, how many times have you craved a bowl of spicy, steaming hot chili on a 98 degree summer day? If you're like me, not many - or maybe never.

And, how many times would you kill for a bowl of homemade, hand - cranked ice cream when there's about two feet of snow on the ground? About as often as I have traveled to Jupiter and back I would guess.

Although, I will say, there is one venerated, time honored exception. That would be for us Southerners - sweet iced tea year long. Ten degrees outside? You better believe it - we want our iced tea.

I'll never forget how I was awakened to the fact several years ago the rest of the world didn't work this way. I was living in the great state of Maine for a few months. We had gone out to dinner one evening and I ordered iced tea (I was already resigned to the fact it would be unsweetened). The waitress looked at me and said, "I'm sorry but iced tea isn't in season."

My first reaction was to incredulously say, "But, you don't have to go out and hunt the darn stuff - it's just a drink." I realized the cultural divide was too wide and kept my mouth shut like a polite Southern gal.

Out of curiosity I asked when the "season" began and she informed me Memorial Day weekend.

It was the middle of March.

I called home, had my mom send me some family size tea bags and I made my own darn tea - by the gallon.

But, all humor aside, this past week we have seen a big portion of the country locked into a deep freeze that included snow, sleet, ice, cold rain, wind and gray dreary days even in the Deep South. This morning the frost was so heavy as the temps dipped into the 20s it looked like a light dusting of snow had been left behind.

So, every time the weather changes to cold and frosty, I bring out the warm and toasty food. You know the type - comfort food that holds body and soul together.

What is Chowder and Where Does it Come From?

For me good cold weather food is soup, chowder, chili and stew. Earlier in the week I had made a fabulous Easy to Make Homemade Chicken Noodle Soup.

Today I wanted to send my husband, (my blog followers know him as Tall & Handsome) off to work with a rib sticking chowder and hot cornbread. I had an idea what kind I wanted to make, but I got to thinking about the different kinds of chowders there are.

But, there are so many varieties of chowder.

A chowder like dish dates back centuries. Just where the word chowder comes from is debatable. Speculation is from the Latin word calderia which referred to a huge cooking pot. To me the Old English word for fish peddler, jowta, makes more sense considering many chowders involve fish or seafood and jowta sounds similar to chowder.

Chowder recipes evolved over the centuries throughout Europe and by 1751 the first printed recipe in Colonial America was found in the Boston Evening Post.

Chowder was originally considered a poor man's food because a hodgepodge of ingredients went into the pot to make the chowder. But over the centuries it's developed into a meal fit for kings...and Presidents. In Boston, MA you can find the favorite booth of President John F. Kennedy at one of his favorite chowder houses, the Union Oyster House, just off of Faneuil Square.

Feast for my Busy Guy

So today I sent my guy off to work with a tummy full of piping hot Corn and Potato Chowder and hot Cornbread. He was a happy camper.

Over the years I've made some adjustments to the recipe to make the taste richer (low sodium chicken broth instead of water) and healthier. Center cut bacon is leaner than regular bacon therefore lower in fat and calories. If you can't afford center cut, make your own - trim off the big hunks of fat on the ends of the bacon.

While good just the way it is there are some great companion serving ideas for this chowder. We've tried it with just a tad of grated cheese on top. Excellent! As I mentioned, cornbread is fantastic served on the side. You may prefer hot French Bread or even a panini.

Since chowders traditionally were a hodgepodge of leftovers, throw in a hand full of chopped carrots or substitute really lean Canadian bacon for the regular bacon.

Unlimited possibilities is my motto...

Onions, Potatoes and Chicken Broth simmering for the chowder

This nonstick stockpot is very similar to the one I use.

Without a Doubt Some of the Best Bacon on the Planet

Add some holiday cheer to your table. We love using our holiday dishes from Thanksgiving onwards. Nothing says "holiday" like a piping hot chowder in holiday di 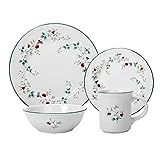