A Simple Recipe for an Effective Sleep Aid Tea

Jason Ponic works in the exciting world of Hollywood film and television by day and writes by night.

If you're like me, you're having a hard time sleeping at night. It's a hard pill to swallow but you're likely battling with some form of insomnia I know it's taken a lot for me to admit it. Over the years I've tried many remedies from over the counter melatonin pills to prescription medications with ingredients I cannot even begin to spell or pronounce. Some work. Some don't. I've managed to weed out the most useless treatments for me.

Every sleep expert will agree that oversimplification of sleeping disorders is a common thread in insomnia treatment. Underlying reasons why someone cannot sleep vary greatly from person to person. For some, its diet, stress, or habit related. Others, its genetic. In my case, it's the latter.

I come from a long line of insomniacs descended from both sides. My maternal grandfather for 90+ years rarely got more than four hours per night. He would rise at 3am, making no attempt to return to bed. He stubbornly blamed it on his childhood farm days, rising to feed the livestock before the sun. Yet his doctors disagreed. My mother battles every form of insomnia known to science and has had every professional study and treatment performed to no avail. She has all but given up hope of a full eight hour night. My father's side isn't any better. Grandfather there used to keep himself awake at night with serious whooping cough. This condition ultimately killed him. Reassuring right? My father has conceded to a ritual of sleeping for an hour, rising to work in his machine shop from 1am to probably 4 or 5 then returning to sleep on the couch til the sun came up. Needless to say, my brother, sister and myself are doomed with a history like that.

With encouragement from my wife, who can sleep through the apocalypse by the way, I began to experiment with various forms of tea remedies. Thanks to Mr. Harry Potter, we began referring to this experiments as potion making. Out of all the treatments I've attempted, these turned out to be the most effective. Not to mention the cheapest. At one point, I was spending one to two hundred dollars every couple of months on various 'miracle' pill supplements you can find at any supermarket. Most, if not all of these, were a total waste of money. My medicine cabinet is a museum of failed attempts at finding the cure.

Again, to say that this tea will 100% work with everyone is an overstatement. Whether it works or not is entirely up to the individual and their needs. At least it can give one a place to start. It can be easily custom mixed to make it more effective. But I'll leave that up to you. 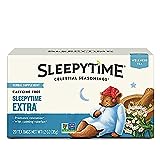 This potion should be taken at least 30 minutes before bedtime. Steep the tea first, then add the Emergen-Zzz packet. The hot temperature may cause the crystals to fizz. Finally for those of you are are old enough and drink alcohol, add the shot.