All About Chipotles and Chipotle Powder

Unless you’ve been living under a rock for the past few years, you’ve undoubtedly heard of chipotle. It's now used in lots of American recipes. You hear and see it everywhere – on TV ads, in Mexican restaurants, in fast-food drive-through menus. It’s in barbecue sauces, mustards, ketchup, jams, salad dressings -even in some of your old favorites. So what the heck is chipotle, anyway?

Even many folks who like the taste of chipotle aren’t really sure what it is. Some think it’s a species of pepper, while others are sure it’s some sort of spice. Well actually, both schools of thought are partially correct.

Chipotle isn’t exactly a species of pepper. It has more to do with the way certain jalapeno peppers are cured. Traditionally, the green jalapenos are left in the field until they turn a deep red and lose much of their moisture. Then they’re smoked and dried over a slow fire for several days. Sometimes the dried peppers are ground into a fine powder, essentially making them a spice-like flavoring agent.

Chipotles have a distinct smoky, earthy flavor that they impart to foods with which they’re cooked. On the heat scale, chipotle peppers are near the middle: fairly hot, but not scorching.

The most widely used chipotle is the morita. It’s a small pepper with a deep red or purplish color.

A larger variety is the chile meco, which is khaki colored and harder to find outside central and southern Mexico.

How to Buy Chipotles

Chipotles are available as whole dried peppers, as pickled peppers, and in cans with adobo sauce, which contains tomato sauce, vinegar, onions, and spices, along with the chipotle peppers.

When buying whole dried peppers, choose the ones with the deepest, richest color. They’ll have the best flavor.

Chipotle chili salt can be found, too. It’s a blend of salt and powdered chipotle peppers. Another way to use chipotle is in the form of chipotle chili paste, where the dehydrated peppers are made into a paste. And as I’ve already mentioned, chipotle powder is also available.

Where to find chipotles

Many grocery stores in the U.S. now carry chipotle powder and chipotles in adobo, and some carry the dried morita peppers. To find a larger selection, visit an ethnic grocery store, or shop online.

How to Use Chipoltes and Chipolte Powder

Chipotle goes great with numerous American recipes. The canned chipotles in adobo sauce can be eaten whole, diced, or pureed. They’re good with dried beans, lentils, and rice. You can also use them to flavor stews, soups, and marinades for beef, pork, chicken, and lamb.

Dried chipotles can be rehydrated by placing them in warm water. Remove the seeds and stem first, then let them soak for 15-20 minutes until they become soft and pliable. You can then chop or slice them to use in salsas, tacos, burritos, sandwich spreads, mashed potatoes, cheese dips, and other dishes.

To grind your own chipotles, start with whole dried peppers, but remove the stems. For a milder powder, remove the seeds first. For a more pronounced flavor with more heat, grind the seeds, too.

You can use your home-ground chipotle or purchased chipotle powder the same way you’d use chili powder to season foods.

How to Store Chipotle Peppers

The canned chipotles in adobo will keep for a long time in the fridge after opening. Just place them in a plastic container with a lid. To freeze, place the peppers in a freezer bag. it’s easy to break pieces off the frozen peppers to use in cooking.

Store dried peppers in jars, with the lids screwed on tightly. Store away from direct sunlight and heat sources. 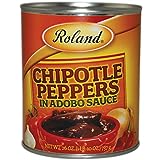 How to clean a chipotle pepper

How to make a chipotle-lime sauce

How to make a honey-chipotle marinade