Most people all over the world are conscious when choosing cookware, as potential dangers are associated with some particular materials and that too not without a scientific reason. After reading a lot of reviews on various cookware products and going through the forum discussion threads, I thought of putting down some important facts about “Hard anodized aluminum” cooking utensils. Hard anodized aluminum kitchenware has become the latest love of homemakers and chefs, but still some do express their concerns for long term safety. Having chemistry as major helped me to understand certain facts better from the molecular level. Hence I would like to share and simplify some basic facts about “hard anodized aluminum” and its properties.

What is "hard anodized aluminum"?

As the name suggests the base metal aluminum is hardened using some process called "anodization". Aluminum as a metal is soft, with light weight and has density one-third that of steel. It is a highly reactive metal and spontaneously reacts with the oxygen in the atmosphere to form a layer of aluminium oxide on top of itself. This phenomenon is known as "sacrificial protection" in which reactive metals get oxidised (i.e. react with oxygen in air and thus sacrifices its topmost layer) readily and forms a stable, protective oxide layer on itself, rendering the rest of the metal resistant to further corrosion. This spontaneous phenomenon happens naturally and attributes to the corrosion-resistant properties of the metallic aluminum. Once the aluminum oxide (also commonly called alumina, Al2O3) layer is formed the highly reactive aluminum becomes passive and the process is also called passivation.

Now, with this understanding, let's get back to "hard anodization". "Anodization" is nothing but a process in which the natural process of oxidation or passivation of aluminum is carried out in a much controlled and accelerated fashion. This is done electrochemically, that is using electric energy to bring about the desired chemical reaction. As you all must be aware, an electrochemical process requires two electrodes (conducting rods, usually made of metals as metals are good conductors) connected to positive and negative terminals of the battery through which the electric current will pass. The electrode connected to the positive terminal is called "anode" and the one connected to the negative terminal is called "cathode". Since in our case, aluminum metal is connected to the positive terminal of the battery to get the required oxidation by oxygen, it is at the anode, hence the name "anodization". Any electrochemical set up also comprises of an electrolyte (a chemical compound in molten state or in aqueous solution) which helps to conduct the electricity and itself gets decomposed. During anodization of aluminum, the most widely preferred electrolytes are sulphuric acid, phosphoric acid, oxalic acid or chromic acid.

In a nutshell the aluminum metal is connected to the positive terminal of the battery (anode) and immersed in a bath of acid. On the passage of electric current, oxygen is liberated at the anode, reacts with aluminum and forms a stable, thick layer of aluminum oxide, thus hardening and toughening the metal.

Aluminum is a versatile metal and has a found a wide range of applications in various industries largely due to its light weight, good conductivity and anti-corrosion properties. But its soft texture, vulnerable to scratches, strong acidic and basic chemicals, drove the scientists to look for alloys with other metals or processes to enhance its properties. Aluminum and its alloys based cookwares were very extensively used in kitchens all over the world unless in 1970s, some scientific research linked aluminum with Alzheimer's disease. Also using the aluminum cookwares for a long time were found to cause its leaching into food particles, especially with acidic foods such as tomatoes or lemon juice and during cooking at high temperatures, presumably causing health hazards. 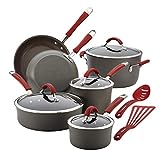 Here are some more reasons why hard anodized aluminum cookwares can be considered smarter and efficient than other options (important properties are in bold): 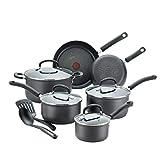 How to take care of your hard anodized aluminum cookwares?

Here are some handy tips to take care of your hard anodized aluminum cookwares so that you can continue to have superior cooking experiences:

Always buy authentic hard anodized aluminum cookwares, read the manual well before buying. Some questions you might ask to the manufacturers or dealers:

It would be wiser to avoid if the answers to the above three questions are YES.

My personal opinion: All seems and sounds great about hard anodized aluminum cookwares and I myself have a bunch of them in my kitchen, which I have been using happily so far. However as a science person, I always believe that as on one hand, material chemists are striving hard to improve the quality and standard of our lives by inventing these novel materials, on the other hand medicinal chemists will be coming out with new research findings regarding health hazards associated with different materials. We will have to accept the current situation and act accordingly.

Are you convinced to buy hard anodized aluminum cookware for your kitchen?