Alton Brown, The MacGyver of Food:Gadgets and Good Eats

Mr. Brown advises, "The only one-task item you need in your kitchen is the fire extinguisher." Everything must be a multitasker. And as country pop songbird Patsy Cline once said,"If you can't buy it, make it."

Mr. Brown adds the advise that one must be like television's MacGyver and come up with answers out of the impossible - or at least the hardware store.

I've always used slab stones from the hardware store to bake pizzas (and received odd stares) and when Alton Brown advised viewers to do so on TV, I was vindicated. I also like the multitasking approach her teaches along with the science of cooking processes and the history of food, culinary arts, and eateries. His recipes are also good.

On television, he is the producer, writer, and star of Good Eats on the Food Network. This is more multitasking than Barbra Streisand did on Yentl. He also comes up with the recipes himself.

Mr. Brown offers maple pecan waffles with peach ice cream, carrot noodle salad, sweet potato chips, peanut butter sandwich French toast, and many other treats. He presents each recipe with some history, some fun and two separate lists: 1) hardware - pots, pans, tools, and utensils, and 2) software - the ingredients. He then is very clear and simple in showing and telling viewers how to prepare each dish.

Too Sexy for Your Kitchen

How One Person Learned the MacGyver Method Salmon Smoking

The Science of the Onion

Outside of the kitchen, this chef's books cover practical topics as far ranging as how to organize a kitchen, what multitasking tools and appliances to purchase, what you can pick up at the hardware store for the kitchen, how to create a recipe file, and how to tour the Mississippi River route north to south, hitting all the regional cuisine and best local eateries along the route - on a Motorcycle.

Favorite fan episode of MacGyver-type cooking involved Alton Brown smoking a salmon with a hot plate, a cardboard box, a cast iron skillet and sawdust - and it works (see video).

This type of ingenuity and common sense, mixed with humor and a unique imagination make Brown and Good Eats a delight.

Alton Brown could easily introduce and market a role playing or board game. He DOES already have a set of ninja kitchen knives with his image engraved on them.

Alton Brown graduated from the University of Georgia and went to work as a cinematographer and video director for 10 years. Watching cooking shows in between takes, he decided that he could do a much better job than those chefs and cooks already on the television shows. He quit his job and traveled to Vermont to attend the New England Culinary Institute,

Alton writes his show with a group of funny characters, including the Ice Box Fairy, Food Anthropologists, Food Police Men Dressed in Black, and appearances by talented actors that portray such legends as George Washington Carver.

One actor rotates through a series of characters, much like actor Stephen Root as the proprietor of the diner on TV's Harts of the West did and the Good Eats character seems to be a play on the Root character. Brown himself plays himself as well as a Kentucky Colonel.

According to Chef Alton Brown, the best coffee comes from beans grown where cacao thrives, in the shade on the low portions of the Andes Mountains.

Link: Cacao - The Food of the Gods

Breakfast in a Coffeemaker

2007 - The First Peabody Award earned by a member of The Food Newwork, for Good Eats. Brown exemplifies the combination of science and cooking taught together on one TV show in a umorous but useful manner. 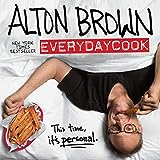 Chef Alton Brown is every high schooler's wish for a science teacher, using humor, clear methods, and common sense. On a Christmas show, he used a chalkboard to illustrate Carbon and Hydrogen combining and when he was done, he had two circles of HO that he read off as HO HO; HO HO; HO HO HO!

At a farm, Alton held a beautfiful golden reddish brown chicken while a "scientific farmer" began to exceed the time limit of his talk. Alton made a joke the man missed and then very slowly and gently, he extended the chicken's right wing to full length, opened his mouth as wide as he could and pretended to take a bite, which cracked up the crew and stopped the talker. At the end of the segment, back in the kitchen, Alton said that he wanted to reverse evolution to have a chicken-dactyl with big enough wings to enjoy - Then he showed the camera such a mock up. Hilarious!

Rumor is that Alton Brown does his show for free, with his wife as Executive Producer. To make a living, he does personal appearances, book signings, sells his line of knives at http://www.altonbrown.com, and teaches cooking seminars around the country.

During Feasting on Asphalt,the motorcycle trip through the culture and good eats along the Mississippi River, he suffered a broken collar bone and kept filming the series.

If you want good recipes, nutritional information, lessons about how cooking actually works, tips on grocery shopping, and some really good laughs, watch Good Eats on the Food Network. The Ice Box Fairy recommends it.