Okay, Manlypoetryman has to be given the credit for inspiring this particular hub. As well as Blonde Poet who has not seen or heard about Buffalo Wings.

Let’s go back to October 30, 1964 to the kitchen of Teressa Bellissimo in Buffalo, New York, USA. This was the birth of the famous buffalo wing. Apparently, she had to whip up a late night snack for her son and his friends. She had a large amount of leftover chicken wings, as they were not used for serving guests, and decided to feed these to them. She deep fried them and then tossed them in a buttery sauce which was spiced with chilli. She then served them with celery and a dipping sauce of blue cheese dressing to cut the heat. Voila! The creation was an instant hit and the now famous “buffalo wing” was born. When it became an appetizer is questionable, but the credit for making it into an appetizer has been given to the Anchor Bar, which is also located in Buffalo, New York. So famous is the Buffalo Wing that July 29 has been designated as “Chicken Wing Day” by the City of Buffalo.

The right tools for the right job! 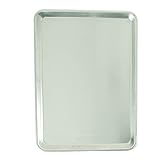 Split the wings into two pieces. Toss them in a bowl with the oil and salt. Put the flour into a large Ziploc bag (or paper bag). Add the wings a few pieces at a time into the bag, zip tight and shake until they are evenly coated with the flour. Remove from the bag and place on a lightly greased foil-lined baking sheet. Repeat for the remainder of the wings. DO NOT CROWD them on the pan. Better to use an extra pan than crowd. Bake the wings for 20 minutes; turn them over; bake another 20 minutes or until cooked and brown.

Chef’s Tip: I use a rack in my pan which provides an air space of approximately ½” between the sheet and the wings. This omits the step of turning them over and baking for an additional 20 minutes. I adjust the overall baking time to 30 minutes as I prefer a crispy wing. I love doing this, as it gets me closer to eating these yummy wings.

In a saucepan, mix all the ingredients for the sauce together. Bring the mixture to a simmer over low heat. Stir occasionally so the sauce does not burn. Turn heat off.

Chef’s Tip: I prepare the sauce while the wings are baking in the oven. Again, it cuts the overall cooking time.

Once the wings are baked, transfer them to a large mixing bowl. Pour the hot sauce over the wings. Toss gently, or stir with a large wooden spoon (I use a spatula) until they are all coated.

Arrange on a plate and serve with celery sticks and the blue cheese dressing in a dipping dish, on the side.

* Note: A chicken wing consists of two pieces, the drum and the flat.

* Note: You can deep fry the wings after coating in the flour, but I prefer baking them as it is healthier.