I’m a Chili-Head. I always have been, but I was unaware of the name until recently. I discovered the term chili-head by chance one fine winter day. I was making chili con carne in my crock-pot and decided to use a little extra chili pepper. I tasted it, to make sure I didn’t go overboard, when I noticed something strange. The familiar burning sensation in my mouth that caused me to shake my head and gasp for air, was followed by a pleasant little jolt to my brain and a feeling of well being washed away my crankiness. There I was, huddled over my crock-pot like, getting a buzz off of chili pepper.

This can’t be! I immediately consulted the almighty Google and sure enough, what I suspected was true. And there are other crazed chili ingesting endorphin addicts like me, all over the planet.

Set your mouth on fire by consuming food that contains capsaicin, a chemical found in the spines of certain peppers, and your body will respond by releasing endorphins, it’s natural painkiller, to ease the perceived pain. So, if you have ever broken a sweat while eating jalapeños, hot sauce, or your favorite Mexican foods, and then laughed about it, chances are you are a chile-head too. The greater the level of heat you can tolerate, the better the buzz. Athletes run for miles to stimulate endorphin release and achieve a runner’s high. People eat gobs and gobs of chocolate to get their endorphin fix and ease the stress of their day. Chile-heads look for something hot to eat, even at breakfast, you may witness them covering their scrambled eggs with Tabasco sauce. Is It Healthy?

There is no evidence suggesting that it is unhealthy. Capsaicin is in fact, a natural anti-inflammatory . It can be purchased in a topical cream form and rubbed on arthritic joints. It has been made into nasal sprays to stop the pain of a migraine or cluster headache.

So no, this is one high that will not hurt you. The following list covers some of the most popular peppers that can be added to your diet for great taste and mouth burning fun. Each pepper possesses a distinctive flavor and level of hotness. There are more than 140 varieties of Mexican chile peppers available, so this is merely a partial list. Hot peppers containing capsaicin are found all over the world and are easily added to your favorite international dishes. You can turn up the heat in your kitchen with dried or fresh chiles. One word of caution: the natural oil capsaicin can burn your eyes and skin if you are not careful, so you may want to use gloves while preparing them. Keep your kitchen well ventilated while roasting or toasting your chiles. The fumes may irritate your nose.

The heat in chile peppers is measured on the Scoville Heat Scale by units, with 1 unit as the mildest and 10 the hottest. Some hot sauces, like the famous Dave’s Insanity Sauce, measure in the fifties, hundreds, and sometimes thousands. There is even a sauce that the manufacturer requires the taster to sign a waiver of responsibility.

Chile Products To Add to Your Pantry

Ancho, chipotle and other types of dried chiles can be purchased in powder form. Pick vibrantly colored powders with a spicy smell, for the best flavor.

Green chile peppers, jalapenos and chipotle peppers are commonly available canned. Store leftovers in a well sealed container for up to a month. 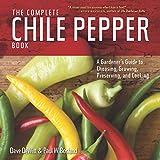