Types of Chicken By USDA Standards

There are several types of chicken commonly found on supermarket shelves, waiting to be turned into delicious meals. The United States Department of Agriculture separates chicken into specific categories. They are grouped by weight and age. They are broiler, capon, hen, roaster, rock Cornish game hen, rock Cornish fryer, and rooster.

The USDA also grades chickens into A, B, or C. Just like in school, grade A is the best. A lower grade means the chicken is older and tougher. Grade A is also the grade you should search for in the grocery store. Look for a tag on the packaging.  Below you will find information on each type of chicken, its characteristics, and recommended methods of preparation.

Different Types of Chicken - Or What In the Heck Is a Capon?

A (baking or Stewing) Hen is an adult laying hen, about a year old. They are usually prepared for market when they can no longer lay eggs. They will weigh more than 3 pounds. Because the meat will be less tender compared to younger chickens, it's better to prepare it as it is named, with moist heat, such as when stewing.

A Broiler (fryer) is a young, tender chicken approximately a 2-4 months old. They can be male or female. They weigh between 2-4 pounds when dressed and ready for market. Prepare with any kind of cooking technique- fried, baked, roasted, grilled, etc.

Capons are older male chickens, usually around 5-7 months old. They have been neutered and fed specific diets. They will weigh approximately 5-9 pounds. They possess ample amounts of tender meat and are very flavorful. Capons are very popular for the holidays. They are sold whole, and are normally baked.

Roasters are similar to broilers, but they weigh more. They are more mature chickens, roughly two to five months of age and weighing between five to seven pounds. They produce more meat per pound compared to a broiler-fryer. They are usually sold whole. The most common method of preparation is to bake whole.

Rock Cornish Fryers are hybrids of pure breed Cornish chickens and pure breed White Rock chickens. They can be male or female. They are young chickens and weigh from 1-2 pounds when sold at the store. Broil or roast them for the best results.

A Rock Cornish Game Hen is either the offspring of a Cornish chicken or a Cornish chicken and a different chicken breed. It is sometimes called poussin. It is a compact, young broiler-fryer, just over a month old. They usually weigh one or two pounds. The most popular way to prepare Cornish game hens is to stuff them, then bake.

A rooster is an adult male chicken. It will have tough skin and meat. They are usually added to processed food products after they are too old to breed.

A couple of other types of chicken that you may encounter when shopping for groceries aren't USDA categories. But you may wonder about them. They are: 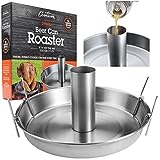 Roasted Citrus Chicken How to Video