The Hearty Potato is a Great Base for a Salad

I like meals that are quick and easy to make. Just because it's vegan doesn't mean it needs a bunch of preparation and 3 hours to cook. This dish has very little preparation and cooks quickly.

For this recipe, all you need is a potato, some salad greens, and vegetables. You build the salad right on top of the cooked potato.

It can be served hot or cold. It's perfect on a hot summer night when you don't want to turn on the oven. And, it's perfect for cooler winter evening when you want something to warm you up.

What I love about this dish is its flexibility. You can use up whatever produce is in the house. The combinations are endless. You could eat this a few times a month and never be bored. One night it can be iceberg lettuce, green beans, and broccoli. Another night it's spinach, carrots, peas, tomatoes, and asparagus. I usually use whatever I've got in the fridge. It's a great way to finish off those leftover vegetables.

Some nights you want something filling, but you don't have the oomph to put it together. A baked potato salad will hit the spot. Doesn't matter if you are a family of one or four. If you've got potatoes and vegetables on hand, you can make this dish.

They Come in Purple, Blue, and Red, Too!

Did you know that potatoes come in all sorts of varieties? Over 4000 to be exact. We only put about 80 of them to good use. That's about all that are sold commercially. If you check out any grocery store in America, you would be hard pressed to find more than four different types.

Most Americans barely try more than Russets and Red potatoes. Yet, there are so many more to try--and many are better than Russets when it comes to flavor.

I prefer the White Rose for its mild, sweeter taste. Some others I like are the Russian Fingerling, Yukon Gold, Yellow Finn, Purple (aka Blue), and Red potatoes.

Each tastes a bit different than the next. The Yukon Gold has more of a bitter flavor whereas the Russet is more bland.

If you've never tried anything but the basics, go to your local farmer's market and see what you can find. Looks like I've still got a few hundred types to try.

Ontel Microwave Cooker, Perfect Potatoes in Just 4 Minutes – As Seen On Tv, Small
If you're having trouble getting your baked potato to come out the way you like it, try a potato cooking bag. We have one and it gives us consistent results especially when cooking more than one potato at a time.
Buy Now

Which Potato Should You Use?

Different recipes call for different types of potatoes. Texture and flavor are a consideration. You've probably noticed that that bag of potatoes mashes pretty well, but kind of turns to mush when steamed. Some make better french fries than others, for instance.The same goes for baking, steaming, and mashing.

For the most part potatoes fall into three categories: those that boil well, those that steam well, and those that all all-purpose. The starch varieties tend to fall apart when cooked, so they are great for mashing. Some in this category are White Rose, Russet, and Idaho.

The waxy varieties hold together really well. They can be roasted or fried and still hold their shape. Red and new potatoes fall into this category.

Some varieties like the Yukon Gold are called all-purpose potatoes because they have qualities of the other two types. They are starchy and waxy. They work with almost all cooking methods.

Use Whatever is in the Fridge

A Word of Caution About Those Eyes

Don't eat the green parts and eyes (technically called sprouts). They contain a toxin called glycoalkaloids, which is toxic. It can cause problems in humans and animals from cramps to diarrhea.

Just remove those parts (trimming or peeling). The rest of the potato is fine.

This is my recipe for homemade vegan unsweetened plain soy yogurt (that is a mouthful, isn't it?) I love to use it as a condiment.

Prep Time for One Serving

How to Put it Together

Patata is the Spanish word for these delicious tubers. The English word potato is derived from it. Originally the term only referred to a type of sweet potato. Today it is generalized to mean the whole group.

We have Peru and Bolivia to thank for the potato. They first cultivated them sometime around 6000 BC.

I love potatoes. Oh, I know they've gone out of favor with some because of carbs. But, nothing fills me up like a potato. One large potato feels like a meal. That's because they are packed with fiber. An average sized potato contains 7 grams of fiber.

Also, it's an alternative to grains. It's nice to have variety in one's diet.

Spuds, as they are affectionately named, have 7 grams of protein. They are a good source of Vitamin C (48%) and Iron (18%). One potato helps towards your daily requirements.

Let's not forget potassium, an important nutrient in keeping our bodies healthy and our brains functioning the way they should. A medium sized Russet potato contains 951 mgs. That is 27% of your daily requirement. That beats bananas which have 400 mg of potassium. And, they taste better than potassium tablets. 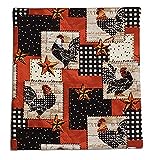 Microwave Potato Bag - Patchwork
This bag can cook potatoes, corn on the cob, and a whole lot more. Bag is made of 100% cotton and has a cute patchwork pattern. It is made in the USA.
Buy Now

Nutritional Facts (Not Including Topping)