The Scots may well have a reputation for eating healthy breakfasts like porridge, but the reality is they enjoy nothing better than a full Scottish breakfast.

Partly due to the cost of the ingredients, a full Scottish breakfast used to be restricted to Sunday only, when the whole family could gather round the dining table to enjoy a special Sunday breakfast that was different to every other day of the week.

Nowadays, the rate of heart disease in Scotland is soaring thanks to many families deciding to treat themselves to a full Scottish breakfast every day of the week.

A full Scottish breakfast is even more unhealthy than a full English breakfast, containing as it does much more saturated fats than the English version.

How to Make a Scottish Breakfast

Ingredients for a full Scottish Breakfast for two people

What are These things?

All of the things here are made up by a butcher and not the cook. Sunday being the traditional day for having a full Scottish breakfast is also the Day of Rest, and that included the busy housewife.

Haggis - made up by butcher and not something most housewives would want to know how to make. Consists of parts of a sheep's organs mixed with oatmeal, suet, chopped onion, spices.and salt and cooked in a sheep's stomach.

White pudding -is made of minced pork meat, suet, oatmeal, spices and bread and shaped into a large sausage.

Fruit pudding -is made of wheat flour, currants/sultanas, beef suet, sugar, salt and cinnamon and is shaped into a large sausage.

Square sausage -also known as Lorne Sausage, is basically just sausage meat which may be pork or beef or a mixture of the two set out in blocks from which slices are cut as shown in the picture to the right here. Great on Scottish rolls with

Link sausage - link sausage is your normal sausage meat shaped into sausage shapes in an edible casing and made from ground beef or pork, or a mixture, and salt, herbs and spices.

Black pudding - this is known in N. America as blood pudding. It's color comes from the blood of pig, cow or sheep and is mixed with suet, bread, oatmeal, spices, salt and barley.

After writing this, my mouth is watering and I would love to have a full Scottish breakfast right now! It really is the tastiest of meals, and black and white pudding and haggis are absolutely delicious despite how they may sound. 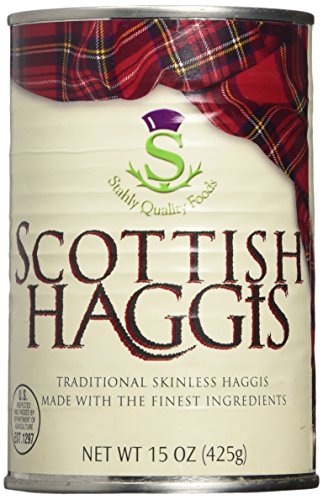 Similar products at Amazon for a Scottish Breakfast