History of Garam Masala a Taste of India

A Taste of India

Garam Masala is a spice blend common in Indian and other South Asian cuisines. The Hindi garam (“hot”) and masala (“mixture”) is a blend of ground spices. The word garam does not refer to the heat of the blend, but rather to the intensity of the spices and the blends “heating” properties in raising the body’s metabolism. Garam masala is not hot in the sense of chili peppers; it’s more of a pungent mixture.

The spices used in making a garam masala differ according to region and personal taste and can vary greatly across India. Some common ingredients are black and white peppercorns, cloves, malibar leaves, long pepper (also known as pippali), black cumin, cumin seeds, cinnamon; black, brown and green cardamom, nutmeg, star anise and coriander seeds. Various combinations of these and other spices are used in regional variations, but no combination is considered more authentic than another.

In Northwest India, garam masala usually includes cloves, green, black and/or brown cardamom, cinnamon, cassia, mace and/or nutmeg. Black pepper is sometimes added if the mixture is going to be used immediately. The addition of black pepper will change the character and flavor of the blend if it is stored. Caraway and black cumin are also typical of a garam masala from the north. The garam masala is made by combining the spices and grinding them all together; but not roasting them.

The spices are carefully combined and blended to achieve a balanced flavor. In some cases, it may be desirable to emphasize a single flavor for a particular dish. The garam masala is usually roasted before use, this releases the flavors and aromas of the spices.

Many of these commercially prepared blends are ground and do not keep well; they lose much of their flavor and aroma. Whole spices keep fresh much longer and can be ground when needed using a mortar and pestle or electric coffee grinder. When using commericially ground garam masala, it is usually added at the end of cooking to obtain the fullest flavor and aroma. Whole garam masala, however, is added early in the preparation of a dish. It is usually added to the cooking oil, fat or ghee, providing a much more pungent flavor.

One rite of passage for Indian cooks is learning to become a masalchi, or spice blender. And with good reason—a single Indian dish may call for as few as two or as many as a dozen individual spices to create its unique flavor.

Though not much is known about the history of garam masala, it is mentioned in Maragaret Shaida’s The Legendary Cuisine of Persia which says “Garam masala is derived from the Persian garm meaning hot and masaleh meaning ingredients or materials.” Its presence in most dishes on mughal origin suggest that it could be an import of Indo-Islamic rulers.

The fact that most of the spices in garam masala were the expensive traded ones, like cinnamon, cloves, cardamom, mace and saffron rather than cheaper locally grown ones like coriander, cumin and ginger, brings up the possibility that garam masala was originally used by the cooks in the kitchens of nobles, rather than in ordinary homes. 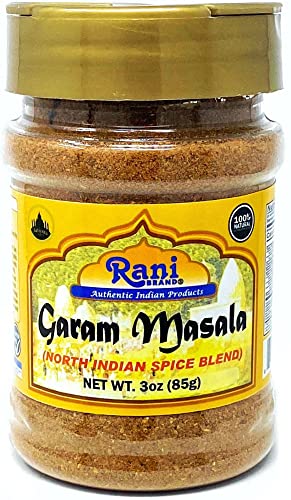 The combination of spices used in garma masala can offer many beneficial properties.