Kenneth, born and raised in the South, resides in Hamilton, Alabama. He enjoys sharing his unique perspectives on life through his writing.

There You Sit Ready to Eat

and you are starved. Every food on the table is beckoning you to dig in! But you are a mannerly-person who has been raised by civil-minded people, so the first thing that you do is place your nice, white cotton napkin upon your lap, quickly-scan your eating area—let’s see, soup spoon, knife, vintage-designed dinner plate, soup bowl, and . . .what one minute, what is blazes is this?

“What’s a butter knife and what in blazes is it doing here????” you demand.

“It is used to spread the butter on your roll, and dear, it has been here since we married 44 years ago.” Your charming wife answers with absolutely no doubt in her answer.

What an arrogant dialogue by (a) pompous man. Oh, sure. He is a man of means—wealthy, successful, respected by his co-workers, neighbors and church neighbors. He loves almost everyone including the pedigreed Basset Hound named, “Stump,” owned by both marital partners. But for the elite-acting man to say and react to such disrespectful chunks of dialogue is not the mark of a high and mighty man of the world.

So without any conversation, the man and woman begin to dine. Yes, “Stump” has his food of t-bone steak in his bowl and he is set.

So Why Not The Butter Knife

you may be asking like I did. What real harm does this lowly-utensil pose to anyone? If you are groping for an answer, I can save you the time by saying “None!” The silver knife is pretty alright, and serves just ONE purpose, outside of these things, it is laid there, with small chunks of butter on its edge just waiting for this couple’s maid,”Santana Gomez Rodriguez,” to come by and whisk it away from the dining area. And tossed (along with other china, glasses, and worthy utensils) inside their brand-name dishwasher to be washed, dried, and put away with no words said.

Talk about lonely to say nothing about left-out. The Butter Knife’s life is both of these adjectives, but they do not complain.

What’s really sad is that when the Annual Silverware Reunion is held, the Butter Knife only gets to lay somewhere alone and get to watch the other Spoons, Steak Knives, Soup Spoons, and Cork Screw for opening fine wine, having a big old time laughing, telling silverware stories, and once in a while, looking in the Butter Knife’s direction, and whisper, “Such a sad thing for our co-utensil, the poor Butter Knife, who only gets to watch us have a great time.” No wonder that the Butter Knife is trembling with tears of sadness at being treated in this ugly manner.

It is what it is. What probably happened years ago, the Colonies who settled America, brought everything with them from England including the silverware, but don’t forget the poor Butter Knife, and at this pivotal juncture, the Butter Knife was held in high esteem and respected by the Colonists and early kitchen utensils such as the Butter Churn, (Butter Knife’s first cousin), Washing Pan, Skillet, Forks, Steak Knives, Pots and Pans, and the Butter Knife who at this early time in our country, was allowed to stand in a very special wooden holder in the middle of the table for everyone to see and admire.

And When The Village Colonists

Just think of just how limited our friend, the Butter Knife really is. What else can a Butter Knife do but spread butter on a roll or bread? This lonely utensil cannot cut steaks, meatloaf or bacon. It cannot dip delicious soup to bring to the mouth of these elite married people. To really cap-off the ONE use of the Butter Knife, this knife blade is not even sharp. Even the other sharp Steak Knives joke about it in the silverware drawer, “Shhh! Just look. Over there. “Old One Use B.K. is laying there by himself. Makes me glad that I am used most every night.” And the Butter Knife hears every slur, nasty joke all aimed at him. But he just keeps his mouth shut and spreads butter like nothing was wrong.

Butter Knife Did Have a

date with a female Salad Fork, and what a dish she was. Trim, shapely, and very attractive. And after a long time of negotiation, the Butter Knife did it! He was going to take Salad Fork out one night and enjoy himself while forgetting all of the ugly things and words that the other kitchen utensils had done and said about him. Life was looking up.

Until . . .that one moment when Butter Knife walked over to where Salad Fork stayed and he was so excited to be with a female who looked as sharp as she was. And he was so happy that the other utensils would look upon him with envy at him taking a female like Salad Fork out on the town. He was even in a mood to write a poem to commemorate this very special time in Butter Knife’s life.

Then Salad Fork sat up in the place where the silverware is placed and Butter Knife picked her up ever so gently and he was smiling from blade’s end to his handle. And polished to shine better than a new nickel. Butter Knife was ready to go. Until . . .Salad Fork looked at Butter Knife up and down and let go a blood-curdling laugh that would easily break the crystal wine glasses that are place in the highest place in the kitchen due to their useful place on the dining room.

Butter Knife was surprised at Salad Fork’s laugh that sounded a lot like a hyena on the hunt for prey. Then it happened. Salad Fork opened up her tines and said . . .”Are you THE Butter Knife who ONLY serves ONE thing, spreading butter?” And laughed like a crazed jackass at him again.

Which broke what little of his spirit of service that he had inside. Butter Knife slowly jumped away and jumped inside his place on the very back of the silverware drawer. Salad Fork laughed even harder as he walked away.

And although this is sad and depressing, this could be how Butter Knife’s birth came to be, or spread.

should have a serious note at this time. Sure, I did a moderate job of using comedy to spotlight a fact that a butter knife has only limited uses, but still holds a place when the silverware is set upon a dining table.

I used to use a butter knife over the years and I have to come clean, I got close to my butter knife because I could never have an accident and cut myself. 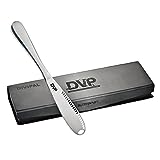