How did the first cup of coffee come to be? Coffee is said to have originated in the highlands of Ethiopia. The legend states that a goat herder named Kaldi first discovered the coffee tree when he saw his goats eating the berries. He noticed that his goats would become quite energetic after eating the berries and would remain lively throughout the night.

Kaldi reported his discoveries to the local abbot who made a tea from the berries. After drinking his “tea” the abbot found that he could easily stay awake during the evening prayers. It did not take long before all of the monks at the local monastery were drinking the beverage and reaping the stimulating effects.

Soon, word of these wonder berries made it to the Arabian Peninsula. Arabs began to cultivate and trade in coffee, spreading the commodity around the world. By the sixteenth century, coffee was being cultivated and traded in Egypt, Persia, Turkey and Syria. In 1615, coffee came to Venice where the local clergymen condemned the consumption, calling it the “bitter invention of Satan.” Pope Clement III was called upon to intervene and formally condemn coffee consumption. The Pope first wanted to test the beverage and taste it for himself. After finding the drink agreeable, he gave Papal approval which helped to remove the stigma. Coffee is now grown in many countries across the globe.

Starbucks did not invent the idea of the public coffee house; that honor also goes to the Far East. During the late 16th century, public coffee houses, called gahveh khaneh, began to spring up all across the Arabian Peninsula. Much like coffee houses of today, patrons frequented these establishments to enjoy quality coffee, play chess, catch up on the news, see performers and hear music. These coffee shops quickly became the centers of information exchange and began to be called “Schools of the Wise.”

In Europe the coffee houses were called “Penny Universities” since a penny bought a cup of coffee which could be enjoyed while engaging in lively conversations. London had more than 300 such coffee houses in the late 17th century, and each one catered to individuals with specific interests, such as high finance or the arts. In fact, many businesses grew from small, specialized coffee houses; an example is the Edward Lloyd’s Coffee House which later became Lloyd’s of London.

"The Coffee Song" by Frank Sinatra

History of the Coffee Maker

Back in the day, a good cup of coffee came about by boiling ground coffee beans until it “smelled right.” This produced a bitter drink that required milk and sugar to become palatable.

In about 1800 the drip coffee maker was invented in France. Over the years there have been design changes and automations, but the basic mechanics have remained the same; boiling water is poured over a container of coffee grounds and the coffee drips into a coffee pot below. At about this same time, the French also invented the first espresso maker, though the current style of espresso maker was invented in 1934 in Italy.

In the Mid-1800s percolator coffee pots were invented. Those first percolators were very similar in design to the stovetop versions used today. These pots allowed for a less labor intensive coffee making experience while also keeping the grounds from winding up in the cup. However, there was no real improvement in bitterness over boiling the coffee in a pan.

The modern drip coffee makers are just an automated version of the original French designed drip coffee pots. The ease of use and full automation of coffee making has made the drip style makers very popular; in fact, most homes and restaurants use this type of coffee maker. 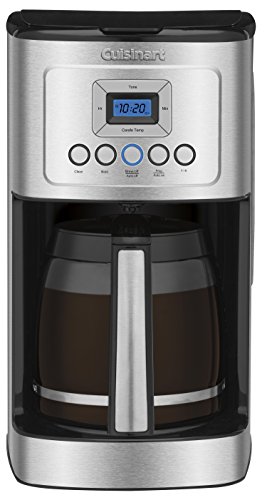 In an effort to curb bitterness and make a rich and smooth cup of coffee, many different styles of coffee maker have been invented over the years. Some have been variations on the old standby drip coffee makers, while others have actually changed and enhanced the coffee experience.

The perfect cup of coffee is subjective to personal tastes, but there are some universal tips and hints that can be used to help make a good cup of coffee better:

Just remember, to make a good cup of coffee requires fresh ground beans that are dark in color with a nice visible oil. Brew time should be short, and coffee should not be left on a warming plate.