History of the Bagel

The bagel was first mentioned in a document dating from 1610 in Krakow, Poland. It is thought to have been given to women as a gift after they had given birth. There are many theories as to where the name 'bagel' actually comes from. One of the most probable is that it comes from the Yiddish word beygl meaning 'ring'. The bagel is thought to have been first made by Jews in Krakow.

Another version of the origin of the bagel comes from 1683, when it is said that a Viennese baker wanted to pay tribute to the Polish King Jan Sobieski III's routing of the Turks at city gates. The King was known to have a passion for riding horses, so the baker made the new bread into the shape of a stirrup, known as a beugel in German.

The reason why there are holes in bagels is also manifold. First of all, the hole allows the dough to be cooked through more evenly. Secondly, the hole allowed the bagels to be easily stacked for transportation. In the Middle Ages bagels were oftentimes sold on the streets by vendors who had them stacked on a pole or rod in his hand. Another reason given for the circular shape is that bagels and its cousins represent the circle of life and bring good luck.

Bagels were brought to the United States by Polish Jews at the end of the 19th century. These bagels were also sold on street corners by vendors with rods full of them. New York is to this day the home of the most famous bagels in the United States today, the New York style bagel.

It is interesting to note that this Eastern European Jewish staple is now widely available in the United States, but is in fact hard to come by in Central and Eastern Europe. In fact, the only places where they are available for the most part is in Starbucks and Starbucks style coffee shops which have brought the Americanized version of the bagel back to its homeland. Traditional cafes do not serve bagels, and they are also unavailable in bakeries or super markets. Even in Krakow there is just one bagel shop, and even that is run by an American Jew.

This may be because many countries have their own version of bagels which differ from the Jewish kind. In Europe the American style bagel is considered a very ethnic kind of food for the Jews and is not eaten or even known by most people.Bagel type breads are a staple of the Polish, Russian, Ukrainian, Belorussian, Finnish, Turkish, Romanian and others' diets. It is just that the Jewish version has been the one to gain a foothold in the United States, moving it out of the strictly ethnic food category into a more generic category of coffee shop food item. In fact, the bagel was never meant to be eaten in sandwich form as we see all around the United States. Bagel hard liners frown upon relegating the bagels to a mere sandwich bread.

Bagels became available to a wider American consuming public starting in the 1960s, when the mass production of bagels began, and frozen bagels began appearing in supermarkets.

Today we see a variety of bagels made with all kinds of ingredients and with various flavorings such as cinnamon, blueberry, chocolate, honey, etc. Originally bagels were just plain or had poppy seeds or sesame seeds on them. Also, the original advantage of bagels over regular bread was that they lasted a longer time before getting moldy.

Just a word in closing about something that has become identified hand in hand with bagels: cream cheese. Cream cheese was actually invented in 1872, with Philadelphia Cream Cheese starting production in 1880. As it turned out bagels and cream cheese would make a perfect match in American. 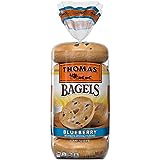