How Does Keurig Technology-Assisted Single Serve Brewers Stack Up Against Keurig and Other Popular Brands? 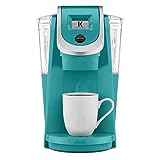 Keurig, which according to the company’s website, is Dutch for the word “excellent,” introduced us to single serve brewing of coffee and other beverages in 1998. Today, almost every appliance company has or is creating a single serve brewing system. Some are even doing it with the help of Keurig.

Mr. Coffee, the brand which brought us the automatic drip coffee maker in 1972, teamed up with Keurig in 2009. Their BVMC-KG1 and KG2 models are similar to Keurig’s MINI Plus Brewing System B31. They’re designed for small places like dorms, RVs, and kitchenettes; they make hot coffee, tea and cocoa; have single-use reservoirs, auto on/off indicators, and removable drip trays. However, the Mr. Coffee models brew in under three minutes while the B31 brews in under two. Mr. Coffee has one brew size while the B31 has three.

Other differences: Mr. Coffee is rather simple to use; comes in red, white, and silver; is cheap -about $78 to $100 dollars; consumers have complained about a small reservoir opening, noise, hot brews not hot enough, and coffee-strength being a bit weak. The Keurig B31 makes an iced beverage; comes in red, black, and platinum; costs about $100 dollars; and complaints have been made about cleaning difficulties.

Conair has a single serve brewing system which allows it to use Keurig’s K-cups. The Cuisinart SS-700 gives consumers the chance to sample more than 200 hot gourmet coffee, tea, and cocoa flavors, and an iced beverage. It is also compatible with the reusable My K-cup which allows you to use your own coffee. This brand falls between Keurig’s popular B70 Platinum Single Home Brewing System and the B155 model. Similarities include multiple brew sizes; a brew time of less than two minutes; easy-to-read LCD screen with digital clock; auto on/off; and removable drip tray.

Main differences between Keurig’s other popular single serve brewers: the B60 Special Edition and the Elite B40 and the Mr. Coffee and Cuisinart brands are that the B60 has a 48-ounce reservoir, three brew sizes, and costs between $140 and $280 dollars. The Elite B40 has two brew sizes; costs about $120 dollars; and consumers have complained about its cleaning difficulty.

Comparing the popular non-Keurig single serve brewing systems, Tassimo introduced by Bosch in 2004 has four models: T10, T20, Suprema T45, and Tassimo LCD Premium T65. They make eight different hot and cold beverages; use pods called T Discs (created by Kraft Foods) with special bar codes which the machines read to determine the appropriate amount of water, temperature, and brewing time for each beverage; they have a liquid milk disc instead of Keurig’s powdered milk for lattes and cappuccinos; and 50- to 61-ounce reservoirs. The T20 has on auto on/off. T45 has manual override. T65 is multilingual and cost range from $100 to $170 dollars.

Senseo, made by Hamilton Beach for the American market, has four single serve brewers: Senseo Original, Senseo Personal Cup1Pod Brewer, Senseo Personal Cup Stay or Go, and Senseo New Generation. Though their coffee flavors tend to be robust and the dark roast is often compared to the Starbucks flavor, their selection is limited. Also every cup may be frothy, but once the bag is opened, some freshness is lost, according to consumer reports. Other concerns are that hot beverages are not piping and the auto on/off goes off after one hour whereas Keurig models take 90 seconds. Cost is about $107 dollars. The New Generation model comes with an adjustable spout for various mug sizes.