How To Make Any Baking Recipe Vegan Friendly

Veganism in its general sense is a lifestyle of abstaining from eating/using all animal products. There are many reasons why people go Vegan, and may include health, weight loss, religious, allergy or ethical reasons. Vegan eating involves removing both meat and dairy products from your diet, which can be quite tricky in today's society. Baking in particular often includes dairy and egg products, which are prohibited in Vegan diets. Lucky for us, there are some simple substitutes that you can apply to basically any baking recipe to make it vegan-friendly. One has to be careful, however, because some alternatives aren't much better for you than what the recipe originally called for (such as baking soda mixes, etc...). This article summarizes some great healthy alternatives to non-vegan ingredients found in most baking recipes.

Cornstarch Egg - Cornstarch is something that is found in nearly every person`s kitchen cupboard, and is an easy solution when baking something that is meant to be dense. Cornstarch eggs act as a great binder, and will help hold other ingredients together. To make a cornstarch egg, simply mix together 2 tablespoons of cornstarch and 2 tablespoons of water until a thick mixture is formed. Use this recipe to replace each egg in your baking recipe that would otherwise use real eggs as a binding agent.

Flax Egg - Flax seeds are commonly found in grocery stores, and have been a healthy eating staple for years as they are a rich source of omega 3 fatty acids. Flax seeds can be ground into a find powder (using a coffee grinder, mortar and pestle, blender etc...) and mixed with water to create an egg substitute. To make a flax egg, mix 1 tablespoon of finely ground flax seeds with 3 tablespoons of water, and allow to sit until the mixture becomes gelatinous. Use this recipe to replace each egg in your baking recipe that would otherwise use real eggs as a leavening agent.

Chia Egg - Chia seeds seem to be all the rage right now in healthy eating. Similar to flax, they are a very rich source of omega 3 fatty acids, and have one of the highest levels of plant-based proteins of any food. Chia seeds can be ground into a find powder (using a coffee grinder, mortar and pestle, blender etc...) and mixed with water to create an egg substitute. Chia seeds absorb many times its own weight in water, and creates a gel-like substance when allowed to soak.To make a chia egg, mix 1 tablespoon of finely ground chia seeds with 3 tablespoons of water, and allow to sit until the mixture becomes gelatinous (about 10 minutes). Use this recipe to replace each egg in your baking recipe that would otherwise use real eggs as a leavening agent.

Note: If you need an egg replacement for breakfast dishes such as quiche or scrambled eggs, or desserts like custard, then you easily substitute silken tofu and simply season it accordingly. However, new studies found that soy isn't necessarily the healthy super-food that it was previously thought to be. Please see the note at the bottom of the article entitled "Substitutions to Avoid" for further information.

Rice Milk - Rice milk is an easily accessible alternative to milk in most baking recipes. Rice milk can some sweetened, flavoured or unsweetened, but generally has a lighter and more waterier consistency than real milk. You can substitute this 1 for 1 in recipes that call for regular milk, however you should note that rice milk doesn't contain the same amount of protein as most other milks.

Almond Milk - Almond milk is one of the best milk substitutes for vegan baking. The unsweetened milk has only a fraction of the calories of regular milk, and you can't taste the difference when used in baking. Substitute almond milk in any recipe that includes regular milk!

Coconut Milk - Coconut milk is an easy and delicious substitute for milk in all baking recipes. Depending on the desired thickness, full fat or low fat options may be used. Simply ensure coconut milk is mixed well prior to adding to your baking recipe. Note that this milk alternative will lend a coconut flavour to your recipes, so use this option for desserts or sweeter baking items.

Cashew Cream - Cashew cream is rich in vitamins, and tastes even better than regular cream. Use this substitute in any recipe that calls for cream, including desserts, sauces, or any baking recipe. Cashew cream can be purchased in most health food stores, but is easy to make at home. Simply soak 1 cup of cashews in just enough cold water to cover them, and refrigerate overnight. Rise off the softened cashews, and blend with about 1/4 cup of water until a smooth consistency - yields about 1 cup of cashew cream. This recipe can be multiplied as much as necessary to yield the required amount for your recipe. You could also make a larger batch in advance, and store in fridge or freezer until use (Do not let sit in fridge too long, or it will go bad). Use this substitute in recipes where the cream flavour is meant to stand out, such as Alfredo sauce, icing, or creamy desserts.

Thickened Milk - If time is not on your hands, you can easily take one of the milk alternatives listed above, and thicken it using cornstarch to create a cream-like consistency. Simply heat the necessary amount of milk in a thick bottomed stock pot, and add a smooth blend of cornstarch and substitution milk to the pot (1 tsp cornstarch plus 2 tsp milk, for each cup of cream). Cook over med-low heat until thickened stirring constantly, about 2-5 minutes. Let cool prior to using in baking recipes. Use this substitute in recipes where the taste of the cream will be masked by other flavoures, such as cakes or muffins.

Coconut Whipped Cream - Whipped cream is called for in many baking recipes, and can be used on its own as a delicious topping for most desserts. To begin making coconut whipped cream, simply chill a can of full fat whipped cream in the fridge for at least 6 hours (overnight preferably) to ensure the coconut water separates from the remaining product. Using a spoon, scoop out the thickened coconut milk from the top of the can, and reserve the remaining coconut water for other recipes or to simply enjoy on its own as a healthy and delicious beverage. To make the whipped cream, blend the thickened coconut milk with a whisk until it has the consistency of whipped cream - might take a few minutes, but it will get there! You can add sugar or spices to the blend, however it is likely not needed. Use in any recipe that calls for prepared whipped cream.

MimicCreme is an amazing product that is on the market today, and can be used as a substitute for essentially any dairy product. Made from 100% natural ingredients (made from nuts), MimicCreme produces vegan-friendly alternatives for milk, cream, whipping cream, and coffee creamer. This product may be difficult to find in stores, but can easily be purchased off of Amazon. With a nearly infinite shelf-life, this is a product you can be comfortable with stocking up on and using for years to come. Visit their website for more information, or purchase from Amazon below. 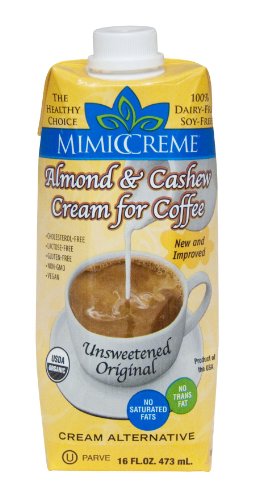 There are many vegan substitute foods listed online that may not be the best alternative for vegan baking. There is no question that soy has plenty of healthy benefits, but it has been proven to raise Estrogen levels in consumers, which may have detrimental effects such as increased risk of breast cancer in women. Baking soda is also a commonly found ingredient in vegan substitutions, however it is thought that soda is bad for your healthy and for the environment both, and should be avoided in possible. Always consult your doctor prior to making any decisions on diet and health, and always make sure you do your own homework prior to following anyone's advice.