How to Make Fig Newtons

I have been cooking for years and hosted a cooking podcast called Kinds of Cooking. I love baking bread and cooking just about anything.

I am sure everyone has their weaknesses. Superman had Kryptonite. Samson his hair. Wonder Woman and her bracelets. Well, it's the same with me. Justin and fig newtons.

I don't buy fig newtons because I can't stop eating them. I can usually control myself not to finish a pack in a day, but it is too much to ask that the pack would last two days. Far too much to ask.

Recently my wife started buying fig newtons. She likes to add a couple to her lunches when going in to work for a tasty snack during the day. She quickly learned after the second pack disappeared that something weird was happening. I knew I couldn't hide my problem from her, so I just came out and told her, "Do not expect fig newtons to last in this house. I literally cannot help but eat them."

I felt bad though. These were purchased for her lunches and I was mowing them down like a herd of sheep in an overgrown meadow. It wasn't fair. So I decided to make amends. I was going to learn how to make fig newtons. Now I could satisfy my guilty pleasure and my wife could enjoy a nice snack during her day.

It's Not That Hard

Believe it or not, making fig newtons are pretty easy. The hardest part was getting the dried figs. There were no local shops in my area that had them, but luckily Amazon has everything we ever need, so I got a 40 oz bag and started planning.

Other than the figs the ingredients are pretty standard. If you cook or bake often, you probably have them available.

I made two batches. The first I followed a recipe that called for orange juice. It was good, but the second batch I was making I realized I was all out of orange juice, but I did have pineapple juice, so I substituted that in (which I will discuss more later in the article).

The first thing you need to do is cream the butter and brown sugar. I made satisfying video to show that in action. It also shows the addition of the eggs and dry ingredients as well. It's time lapse, so don't worry about it being a long time (really it was only about 5 minutes anyway). 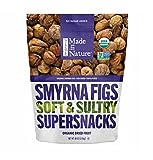 Listen, this recipe and easily be done by hand, but if you have a stand mixer it cuts the time in half and saves your arm the cramps from constant stirring. Once you get the dry ingredients completely mixed in, pack it into a ball and wrap in plastic wrap.

The cookie dough should not be sticky, however, as I learned my second time around it can't be somewhat crumbly either. It will make combining everything in the end extremely difficult and end up looking crumbly and non-uniform.

With your cookie dough wrapped in plastic, put it in the fridge to rest for an hour.

Once your dough is in the fridge you can immediately start making the filling. Take your figs and the rest of the ingredients and put them in a small sauce pan. Bring to a boil and then simmer for 10 minutes. The figs should become soft and plump slightly.

Once this has occurred you will transfer the mix to a blender or food processor and blend into a figgy paste! It won't take long. Transfer this to a bowl and set aside to cool.

Once the dough is finished with it's hour wait you are ready to combine everything and pop into the oven!

Once your down is ready, put it on a well floured surface and roll out. You want it to end up as a roughly 12 inch by 9 inch rectangle. As you are rolling, you can use a knife to cut the frayed edges and incorporate back in as you continue to roll. Mine ended up being very crumbly and required some manipulating to get it rolled up.

Now, cut the dough into three 12 inch strips, and fill the center of each with 1/3 of the filling. Use a spoon to distribute it across the 12 inches. Try and keep the filling and no more than in inch thick as you will be folding and pressing the outside edges over it.

If your dough is the right constancy you will be able to easily fold the edges to the center and "seal" the it together. My first batch was like this (the top picture in this blog), but as you can see by the picture immediately above, this time around the dough was too crumbly and cracked and fell apart.

Transfer the cookies to a pan covered with parchment paper and throw in the oven. The good news, even though my second back of fig newtons don't look pretty, they still taste great!

In fact, I think they were better than the first batch in terms of taste and I attribute that to the one big change I made, and that as using pineapple juice in the filling instead of orange juice. It gave it a nice flavor that was not too far off, but that I truly enjoyed!

Ideally went creating a blog I would want to put my best effort forward. Unfortunately, with the exception of the end result I didn't document my first batch. Fortunately, the second back, while not pretty, came out very tasty, so I don't feel bad showing a little bit of failure along with the recipe.

The point? This recipe is hard to mess up. If you like fig newtons you should definitely give it a try. I am already planning my third batch and I imagine they will keep getting better and better each time I make them!

Let me know if you give this recipe a try. I love them and would enjoy hearing what you think of them as well!