How to Make Herbal Tea to Aid Digestion

Queasiness, heartburn or intestinal cramps, we’ve all know the feeling.

Although these can be symptoms of problems like IBS, GERD, or ulcers, most stomach problems stem from digestive imbalances or mild food intolerances.

Before the advent of Tums and Pepto Bismal, people learned how to treat these problems with herbs and spices. They had learned that one of the best delivery methods is through the infusion, better known as “tea”.

Some of the best herbs to use for common stomach problems are peppermint, ginger, chamomile and thyme.

Traditional Medicinals Organic Peppermint Herbal Leaf Tea, Alleviates Digestive Discomfort, 16 Tea Bags (Pack of 6)
This is one of my favorite brands of peppermint tea. There are also instructions on the box about how to brew it best.
Buy Now

This strongly scented mint is a natural antispasmodic, which means it relaxes the smooth muscles lining the stomach and intestines. This action takes care of mild nausea and intestinal cramping. In addition to relaxing muscles, peppermint is naturally germicidal and pain relieving. Its pain relief is why it’s so commonly used in cough drops and sore muscle rubs.

Studies have backed all of these uses up, and Commission E in Germany has approved its use for digestive problems and pain relief.

Personally, I love drinking peppermint tea when I’m having lactose intolerance problems. The cramping and pain usually goes away within 10 to 15 minutes of drinking the tea. Plus, I just like the flavor.

There’s a reason why there are so many ginger based deserts. Ginger snaps, ginger bread and ginger cookies can all be tracked back to its original use in seafood dishes in the Far East. Seems a little far fetched, doesn’t it?

Ginger was first introduced to Greece, when trade first opened up with oriental countries. They’d discovered how effective it was in avoiding food poisoning from fish, and enjoyed its sweet, warm flavor. Using the practice of including it in recipes as inspiration, the Greeks served it wrapped in bread after large meals. From there, the world’s oldest cookie was born – the ginger cookie.

Today, this root is still used to aid digestion. Dried or grated fresh, it can be easily brewed into a very tasty tea whenever the stomach is causing problems. It blends very well with green tea, as well.

Ginger backs its antispasmodic abilities with its naturally occurring enzymes. Those enzymes work to balance the lower intestines, lowering the occurrence of irritation and cramping.

Studies have proven its use as an anti-nausea tool on motion sickness, and have proven useful in treating the nausea associated with chemotherapy. Animal studies have also shown its potential for preventing ulcers. There was also a small, 10 person study which revealed that ulcer patients showed symptom relief when they took a ginger based cure.

This is another remedy I’ve had great personal success with in treating my own digestion problems. Whereas I’ve found peppermint works better with intestinal problems, ginger has knocked nausea out in short order when I included more of it in my diet or brewed it into a tea.

This is also another herb Commission E has approved for indigestion.

Chamomile is usually viewed as an herb geared more towards soothing emotional distress and for good reason. Researchers in Argentina have actually discovered that chamomile contains compounds which act in the same way as Valium, which offers scientific credence to its age old use as an anxiety cure. Through calming the emotions, anxiety related stomach upset will be eliminated.

However, its antispasmodic properties also aid digestion and may help cure ulcers. If inflammation is causing digestive pain, chamomile is a great option. German Chamomile in particular has some of the highest levels of anti-inflammatory in the herb world.

In addition, it has strong immune system boosting qualities. British studies have found that chamomile actually stimulates the production of white blood cells.

If you’re a fan of peppermint, but the flavor can sometimes become overwhelming, mixing it with chamomile is a good way to mellow it out a little bit. Chamomile’s mild, sweet taste offers a great counter balance, while enhancing the mint’s performance at the same time.

Thyme is one of those great cooking herbs which adds a zesty flavor to any dish, and is very popular in Italian recipes. However, it was first used as a meat preservative. As people incorporated it more into their diets, they noticed fewer stomach and intestinal problems, as well.

Modern science has backed these observations up. It’s since been discovered that thymol and carvacol, two of the primary chemical constituents in thyme oil, both act as muscle relaxants on the smooth muscle lining the digestive tract. Thymol is also a potent antibacterial agent, helping cut down on harmful bacteria.

This easy to grow herb may have the potential to treat ulcers. The bacterium which causes them, Helicobacter pylori, has difficulty surviving an infusion of thyme leaves.

Other herbs include aloe vera, which contains enzymes helpful to the intestinal tract, parsley, which boosts immunity, and dandelion greens, which stimulate the intestines and bolster kidney and liver function.

It’s worth noting, however, that if you’re under the care of a doctor, it’s best to consult with them before incorporating any herb into your treatment plan. Although herbal remedies are generally safe, drug interactions are always possible, and they can effect pregnancy.

Not everyone really likes the taste of tea. Peppermint in particular can be very strong, as can thyme. Adding a good serving of honey to the tea can make it more palatable and offer additional medicinal support.

Honey is one of those remarkable natural substances which never goes bad because it’s such a strong, natural antibiotic. Although modern science has yet to figure out exactly why it acts the way it does, there have been further studies backing up its use as an antibiotic. In fact, a 2011 study has shown that it may have might reverse antibiotic resistance in bacteria.

Beyond the science, it tastes good and can be very psychologically relaxing. Who doesn’t want to be soothed when they’re not feeling their best?

How to Brew Tea

When making your own tea, odds are, you’ll be using loose herbs instead of pre-bagged concoctions. The brew loose leaf tea, you’ll need some sort of tea ball or tea pot which will allow all the leaves to soak without drifting free in the cup itself.

There are also ways to make your own reusable tea bags.

When brewing your tea, don’t bring the water to a complete boil, as that can damage the leaves and diminish the herbs’ effectiveness. Instead, bring it to just shy of boiling, and then pour over the leaves. Let it brew for several minutes, or until it’s dark enough for your tastes. Remember, the longer you let it sit, the stronger the brew will be.

Where to Get the Herbs

There are quite a few online retailers which offer loose leaf tea, and there may be a number of co-ops or stores which specialize in tea in your town.

I prefer to grow my own whenever possible.

Mints are excellent choices because they’re so hard to kill. They just need decent soil, water and partial to full sun. They spread, so unless you have a large area that you don’t mind it taking over, either keep the plants in containers or cut them back regularly.

Thyme is another great herb to grow. It’s extremely hearty and comes back year after year, even in Minnesota. It also tends to grow well in a pot, so if you’re good with house plants, keep a pot of it in your kitchen for both culinary and the occasional medicinal use. This is another one that dries well, too, so you can keep it on hand throughout the year as well.

These remedies are very simple to find, and science is continuously proving what ancient wisdom has known for centuries. Best of all, the teas are generally extremely safe and generally very tasty. 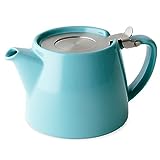 Prepworks by Progressive Stainless Steel Mesh Tea Ball
This type of ball lets few pieces of leaf through the grid and can be used repeatedly for single servings.
Buy Now