Slide your pie onto stone

As a Pizzamaker and moonlighting Restaurant manager for near 10 years, I was often forced to experiment and create new recipes and preparations in order to keep my palate happy while tied to a pizza oven.

One of my most popular creations with fellow workers were variants of dessert Pizzas often made with existing supplies from the Pizza places and whatever could be grabbed from nearby convenience stores by our Delivery Drivers.

Over the last few years, a new family tradition of creating our own Pizzas for one of our Easter dinners has developed. This Pizza was my submission this year.

How to Make a Dessert Pizza:

Strawberry Wine infused Blueberry Cheesecake Pizza with fresh Kiwi on a thin  cinna-sugar crust. Yeah, I know, could use some work on the name!

Dessert Pizza - Preparing the Fruit Base

Dessert Pizza - Creating a fruit base

In a large stock pot I combined fresh blackberries, blueberries and frozen strawberries. A large handful of sugar and a generous portion of Strawberry wine for both the pot and the cook completed the base mix.

This was left to simmer, trying to cook off the wine and reduce the moisture level of the fruit mix.

Alternately, an Ice wine or any sweet wine would have worked. If no wine is handy a sweet clear juice could easily be used.

Come back,stir occasionally and sip on the leftover wine.

After a half hour or so the consistency of the fruit is far more jam like and the mix is beginning to caramelize.

I guess in a jam, or out of laziness, one could just use a pre-prepared pie filling.

I picked up some dough from the local pizza place who will sell off their dough balls - most will, if you ask. Grocery stores in my area carry pizza dough also. But, grocery store dough tends to be poorly rolled.

For a dessert pizza you could use a prepared Boboli style dough but you will get less opportunity to "un-pizza" it. If you have the capabilities, making a very large piece of fried dough is the best base I have ever discovered.

For this Pie I cut a large dough (16ozish) in half and hand tossed to the size of a standard large pie. This was placed on pizza screen and lightly covered in butter. This was left to proof while the fruit filling and other pizzas were prepared. This drastically changes the texture of the pie. But as it is still a very thin dough it will never be chewy.

The dough is quite proofed, Some cinnamon sugar is sprinkled across the dough. Since the screen was floured and the dough was allowed to proof, a slight dry skin has formed on the bottom allowing me to gingerly slide the dough onto the pizza peel below.

Using the Pizza Peel , the dough is slid into a 500 degree oven directly onto a home pizza stone that has been in the oven for near an hour.

On very heavy pies with a lot of toppings or a high moisture level or a long dressing stage its a handy trick to par-bake the dough - this pie fits all three of these factors.

By parbaking you can keep the dough from sticking to your peel. In this case, we also were cooking the cinna sugar into the dough and creating a nice crunchy sugar crunch over teh dough - hopefully further removing any "pizza" taste from the dough.

A mixture of chilled cream cheese, a touch of vanilla and shot of sugar is now spooned onto the crust

Spooning Fruit onto base

Go ahead and pour your fruit mixture onto the pie. If your mixture is at all watery, do your best to spoon the thicker mixture on, or just simmer some more moisture off.

After baking Banana Slices into fruit base and cream cheese

Applied banana slices - and baked another 5 minutes, congealing the berry mixture and creating a slight chewiness and a little skin to the bite.

Dessert Pizza - Completed with fresh blackberries and a garnish of sugar

Dessert Pizza - Playing with your dough

Now applied some chilled strawberries, alternating with the kiwi, for a fun aesthetic.

Made a Dessert Pizza!

Threw some fresh blackberries that had been sitting in a Strawberry Merlot on top as a final touch and sprinkled a bit of confectionery sugar for contrast.

In the course of this Preparation I used some common food items but perhaps some uncommon kitchen implements.

The Pizza Stone was required for the correct and appropriate bite and coloring to the dough -as a New Yorker, if its not on a stone- its not Pizza

I was able to make my Pies to the same size as the circular stone - you most likely want to give your self 4 inches or so of leeway to make up for your possible stumbles as you slide your dough onto the stone. 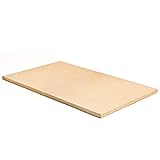 The big piece of wood used to slide your dough onto the stone is called a pizza peel.

The one pictured is a long rectangular style probably intended for bread. you can see the round ones that Pizzamakers usually use in the dough toss pictures below - check out the side of the oven behind me.

Also known as a Pizza Paddle or Pizza board 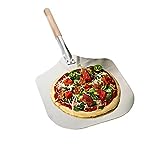 Usually these screens are just used to keep the bottom of a pie from burning when browning the top of a pie heavy in toppings. They can also be used to pre-prep some doughs for whatever reason. Many pizza joints with inferior skill (i.e. slow) will use screens with all there pies and will not have that great brick oven/ stone cooked crunch to the vase of the pizza.

Picking one of these up is suggestible as you get used to using a peel and a stone. Expect a few catastrophes and burns.

Get a real Pizza wheel too. Those flimsy dollar store doohickey just dont cut it right.

Buy all the products at once and most of these online retailers will give you free shipping. 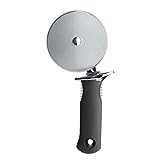 Wadya think? Let me know you stopped by and read about my pie