How to Make the Perfect Sandwich

Metromain are what you could call a food lover in the working class. He had never cooked lobster, but makes the best white fish ever.

The question is of today are: How to make the perfect sandwich? And the short answer is: You can't. But the long answer is: It's complicated...

...First you need to choose bread. Then if and how you want to heat the bread. Then you have the whole range of filling. And should you grill it?

My mothers language is and will always be Swedish. And we have different words for different sandwiches. You might say that we got a smorgasbord of sandwiches. Following is some of the words we got, with explanation.

So imagine my trouble when trying to make a sandwich.

I will write in English as much as I can. But as I don't want anything lost in translation, I need to write in several language. But when I do, I will explain what it is.

White is for the classier occasion, grain is when you are healthy and black is when you need something that puts hair on your chest.

And some breads have seed additives in them, like sunflower seed and wheat bran. If a white or black have additives, it becomes a grain crossover.

And then you have the different types:

Should you heat the bread? And how?

You don't have to heads the bread. But if you do, it becomes more crispier.

You may heat it in the microwave to just have it warmer for a newly baked feel. Or you toast it for that toasty feel. Or you can fry it in a pan with some butter.

The range of topping

You can literally have anything for a sandwich topping. Anything from a sad slice of ham to something grand as roasted kangaroo. But without some guidance, we will have anarchy. And I would say enough when you have two kinds of meat, two kinds of cheese, three kinds of vegetables and one sauce (or less).

Feeling dry with the imagination, here are some examples.

Should you grill it?

If you want, you can take the sandwich to a whole new level and stick it in a pan or on the BBQ and make it a "grilled cheese". Or put it in the oven and make a "melted cheese". (As you see, cheese is a must).

Or you eat it just the way it is. 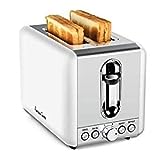