Kimchi is a word commonly used when taking photographs in South Korea, similar to how the English speakers use “Cheese!” Oddly enough, its similarities do not end there. While cheese is a food product, Kimchi is related to food as well. Kimchi is a traditional Korean pickled vegetable side dish that is served alongside meals. Kimchi can also be used to as an ingredient to make dishes such as Kimchi Fried Rice, Kimchi Stew and on one occasion, Space Kimchi, a food staple to accompany the first Korean astronaut in space.

Besides being a ‘cute’ word to say aloud, Kimchi actually has had a very long history in the cookbooks of Koreans. Originated over 2500 years ago, Kimchi in the ancient days was a broth made from beef and cabbage stock to give it flavor. Over time, different variations of Kimchi started appearing, the ggakduki (a radish styled Kimchi), the chonggak-kimchi (cucumber Kimchi with spicy seasoning) and of course, the most popular type of Kimchi, the baechu (seasoned cabbage). In fact, there are over 200 documented variations of Kimchi in Korea. There is also a Kimchi Field Museum in Seoul. Kimchi is not only part of a dietary staple of Koreans, it has become an icon.

What makes Kimchi so unique is that if done correctly, Kimchi is indeed the best way to preserve vegetables. In the olden days in Korea when food depended on a harvest, so Koreans had to last a three to four month winter with what the people have harvested in the Fall to last until Spring. This meant that the Kimchi had to last a whole season and not only did the Koreans succeed with preserving the vegetables for that long period of time, they managed to store the flavors in the preserved vegetables as well.

How to Make Kimchi

In recent years, apparent globalization of the world has shown the growing popularity of Kimchi worldwide. More and more western vegetarian cookbooks now contain Kimchi recipes and even cooking television shows where Kimchi is billed as the main ingredient is growing rampant in the US and the rest of the world. In Asian fusion food restaurants in Europe and United States, different variations of Kimchi are used as they contain tremendous flavors to appeal to the palates of customers. The humble origins of Kimchi have indeed come a long way from being a traditional Korean dish to a global food phenomenon.

Kimchi is also considered a very healthy dish with high nutritional values. Since the dish is made up of vegetables, it contains high dietary fibers, carotene and Vitamin C. World renowned Health Magazine has honored Kimchi as being one of the Five World’s Healthiest Food so if you want a healthy diet but you do not want to deal with flavorless food, try and include the flavor-packed and delicious Kimchi into your diet. In fact, in May 2009, the Korean Food Research Institute conducted a study and discovered that Kimchi could fight off the avian flu. Though this study has not been supported worldwide, the idea that a humble preserved vegetable dish could fight off a flu outbreak is pretty fascinating. 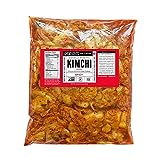 How to make Kimchi

So now you have got all excited about Kimchi, you might ask, “What makes a good Kimchi?” While there are many recipes available on the internet and cookbooks available at your nearest bookstores, master chefs from Korea believe that the secret to delicious Kimchi is to keep it simple. Many recipes online, especially Westernized ones, tend to overcomplicate Kimchi with too many ingredients causing a breakdown in flavor and eventual taste. So before you go about making Kimchi from the first recipe you get off the internet, try to do comparisons between recipes and look for reviews of the recipes if possible. Websites dedicated to the Kimchi and Korean food like lovethatkimchi.com and Kimchi.or.kr/eng offers tremendous assistance to those who are new to the dish. Refer to the how to make Kimchi video above.

If you have never tasted Kimchi before, now would be the best time to jump on the bandwagon and go about making your own. After all, Kimchi in essence is fermented vegetables so not only would it be simple to make, it would be absolutely delicious! Have fun going Kimchi Crazy!