A solar oven is an appliance that enables a cook to heat food using only the power of the sun. All solar ovens operate on the principle of collecting sunlight from a wide area and concentrating the resulting heat into a small area. Different ovens, however, accomplish this concentration differently. Solar ovens typically fall into one of five different categories.

The box cooker is a solar oven that concentrates sunlight in much the same way as your car on a sunny day. Tamara Dwyer, on her Web site, "Science of Solar Cooking" describes the box cooker this way: The food is placed inside a box. The lid of this box is made of clear plastic or glass. Sunlight enters the box. A dark bottom or dark sides absorb the sunlight and get hot. Insulation in the sides of the box and the glass of the lid trap this heat in a process known as the "greenhouse effect." With good insulation and reflectors channeling additional sunlight into the box, temperatures inside can reach levels comparable to a standard gas or electric oven. Bill Becker on his "Making A Solar Oven" Web site records temperatures in his solar oven as high as 462 degrees.

Buy a box cooker at Amazon 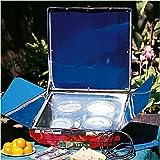 While box cookers rely on insulation that traps heat to raise temperatures, parabolic cookers rely on a large reflective surface. They put more heat into the system so they don't have to trap as much of it. Picture a satellite dish. Parabolic cookers look just like that, except instead of a feedhorn collecting radio waves, a cooking pot collects sunlight. The Solar Cooking Archive Wiki describes how sunlight comes straight in to the dish and then is bounced by the reflective material coating the parabola to a focal point. That focal point is intensely hot and heats the cooking pot placed in front of it. In essence, the pot in the parabolic cooker is the solar oven and the reflector the "burner."

The panel cooker uses some of the principles of a box cooker and some of the principles of a parabolic cooker. The Bernard solar panel cooker is one such solar oven. It consists of three flat reflective panels which channel sunlight to a focal point. At that focal point is a dark pot, which absorbs the heat of the sun. The pot is either covered with an upside-down clear glass bowl or it's placed inside a turkey roasting bag. The enclosure creates a greenhouse effect to keep the heat in. 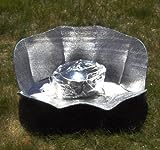 All three of the cookers we've just looked at operate using reflected sunlight. It is possible, however, to concentrate sunlight onto a solar oven using a lens, which refracts the light to a focal point. Again, the pot itself is the solar oven and the lens is the "burner". The most common lens used in solar ovens is the frenel lens, a lens with a flat cross section, which makes it light and easy to move and focus.

Sun2Steam, an Australian solar energy company, has a new take on solar ovens that doesn't involve putting sunlight on the cooking pot at all. It doesn't use reflectors or lenses, but rather a collector similar to the collector of a solar hot water heater. The collectors, a series of parallel, sunlight-absorbing tubes, heat water to make steam. This steam is channeled to a chamber containing food.

More of my Solar Cooking Articles