Light, Dark or Blackstrap Molasses - Which Do You Need? Understanding the Differences 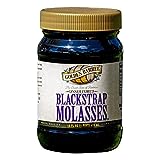 Blackstrap, first pressing, sulfured, unsulfured…what kind of molasses do you need, and what's the difference anyway? Who knew buying the molasses you needed for those cookies or baked beans could be so hard!

How is Molasses Made?

Molasses is a by-product in the manufacture of sugar, mostly from sugar cane or sugar beets. To make sugar, sugar cane is pressed to extract all of its sweet juices, leaving behind only a woody pulpy bit of cellulose. These juices are brought to a boil and the sugar contained within starts to crystallize – and it is removed. Not all of the sugar in the syrup can be extracted, and the syrup that remains after the extraction process is molasses.

The sweet liquid pressed out of the sugar cane is processed (boiled) three times, and syrup that remains after each boiling is molasses.

If the syrup remaining after the first boiling is not sold as light molasses, it is boiled again to extract more sugar. The syrup that remains after this second extraction boiling is called dark molasses and it is darker and fuller tasting than light molasses, with a sugar percentage of about 60%.

You can generally interchange light and dark molasses in recipes.

What's left over after a third boiling and extraction is called blackstrap. It contains about 50-55% sugar and is less sweet and far more flavorful (bitter) and robust than either medium or dark molasses. It is used in the cooking of certain cookies, and famously in Boston Baked Beans, and it is an incredibly healthful form of sweetener.

Blackstrap molasses concentrates many of the nutrients found naturally in sugar cane and is an excellent source of iron, calcium, manganese and Vitamin B and E, as well as many trace minerals. One spoonful of blackstrap is said to have as much iron as 9 eggs, and more calcium than a full glass of milk.

When unripened cane (green cane) is used to make sugar, the molasses is infused with sulfur as a preservative. When ripe sugar cane is used, no sulfur is needed.