This is a simple recipe for a healthy, tasty smoothie you can make easily at home in the morning. I've included the reason why each ingredient is good for you.

Naturally, each person's taste is their own, so feel free to modify to suit your own palate.

Note, for blending, I use the Magic Bullet. Okay, stop laughing. Yes, it's been featured on infomercials you've probably seen at around 3am. It does work, though. I've had it for more than a year, and use it about 5 times per week, and it's never given me a bit of trouble. Compare that to the Hamilton Beach blender (that cost twice as much) that burned out when I tried to make hummus with it...

(I bought my Magic Bullet from eBay, instead of off the informercial where you get 2 for 1. Instead, I'd rather buy one for half the price.)

Throw in about 3/4 cup of frozen fruit. I like to use frozen blueberries (frozen organic wild blueberries, if available, since they're higher in antioxidants) since I like the taste, and blueberries have among the highest levels of naturally-occurring antioxidants. They're also pretty easy to buy at Trader Joe's or your local supermarket. I like frozen fruit because they retain the vitamins of fresh fruit, and they make the smoothie cold.

Now I add protein powder. My favorite is Rainbow Light's Protein Energizer, because it's rice-protein based (hypoallergenic; extremely few people have or develop rice allergies), and has natural fiber and herbal extracts. It also helps make smoothies very creamy and custardlike, for some reason.

Other options, if you want to increase the protein content of your smoothie:

Now I add about a half-teaspoon of matcha (powdered green tea). Green tea is extremely high in antioxidants, especially a group of polyphenols called catechins. Particularly high among the catechins in green tea is EGCG (epigallocatechin gallate), which has been the source of growing scientific interest in the health field.

Adding too much matcha makes the smoothie bitter, so don't overdo it.

Next, I add a teaspoon of powdered greens. I use Greens Plus, but there are several other brands out there that are pretty similar. They include a variety of plant and herb extracts that are high in natural antioxidants and chlorophyll (a natural internal deodorizer, and rich in magnesium). With the idea that there are lots of things that are good about a highly-varied diet that we just don't know about, I think adding something like Greens Plus is a healthy addition to the smoothie.

Greens Plus tastes good to me (kind of like wheat grass--both sweet and vegetal), but avoid those that have too much spirulina, which is healthy but tastes downright swampy... 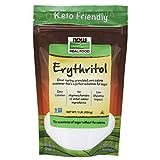 NOW Foods Erythritol Pure Sweetener,16-Ounce (Pack of 3)
I personally like this product since it's 100% natural, virtually no calories, and doesn't cause any stomach upset or any other gastrointestinal problems!
Buy Now

Yup. Cocoa. I like chocolate, and cocoa is good for you. Rich in polyphenols, cocoa is actually eaten as a health food in Japan.

Cocoa powder, naturally, doesn't have the fat and sugar found in chocolate. A recent study says that cocoa compares nicely to both red wine and green tea when it comes to antioxidant levels.

Chocoholics, rejoice! I dump in a good teaspoon.

Then, I add sweetener. I use erythritol, for a few reasons:

* it's 100% natural, occurring naturally in fruits in small concentrations

I usually put in 2 teaspoons, which contribute less than 2 calories to the smoothie.

I buy erythritol in bulk online.

Step 5: Pretend you're making a margarita...

I typically add either rice milk or iced tea (about 3/4 to a full cup). Another option is to add kombucha tea, which has a vinegary taste, but has reputed health benefits.

A handful of ice will give the smoothie more body and a milkshake-like mouthfeel. If you don't like drinking cold beverages, though, skip it.

With my Magic Bullet, I screw on the blade attachment, shake it up, and blend for about 15 seconds. I then add the "Comfort Lip" (their term, not mine) and drink away!