Give DIY Butter A Try!

I first read about the process of making your own butter when I was a little girl, reading the Little House series of books by Laura Ingalls Wilder. When I was in junior high, I got to make butter with a day camp group one summer. Now as an adult who is interested in local eating and supporting my area farmers, I happen to live in an area where I can easily get raw milk plentifully and regularly at my weekly farmer's market. Making homemade butter is easy and fun, and delicious.

When you make your own butter, the product is just about as fresh as can be and is free from artificial ingredients or preservatives. For those who are interested in reclaiming lost household skills, making butter is a great place to start. And if you have kids, this can be a really fun shared activity.

To make your own butter the really traditional way, you start off with milk. However it's not what most people have come to identify as their everyday, out-of-fridge milk. You want non-homogenized, non-pasteurized milk. This is also what is called "raw milk." If you let the container sit, you will get a rich, yellow layer on top. This is the cream separating out.

You skim the cream off carefully with a spoon into a container of its own. This then needs to sit for about twelve hours. Then it's agitated, which is a fancy way of saying shaken and/or mixed, which causes it to form solids. It's these solids which we call butter. Some modern butter makers start out with store-bought cream, but you then don't get the fantastic buttermilk that is the by-product when you make it yourself using raw milk.

Butter can be made with something as simple as a big glass jar or as fancy as a modern electric mixer. Using a butter churn, meaning something made especially to make butter, often makes the process easier than the glass jar and more simple as these tend to work without electricity. The method you chose will depend on what sort of equipment you wish to own and how much of your own time and effort you want to put into the process. 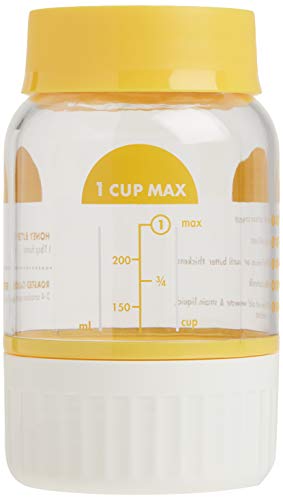 Chef'n Buttercup Butter Maker, One Size, Lemon/Meringue
Make your own homemade butter with this special separator! It's easy and quick.
Buy Now

How A Butter Churn Works

When you "churn" butter, what you are doing is actually agitating the cream so that the walls of the tiny particles break, causing them to stick together and form lumps.

The type of butter churn I read about in the Little House books was a wooden churn, sort of like a small barrel with a wooden pole that comes out the top. Down in the containers, the pole often has a round of wood on it with holes in it. You moved the pole up and down, which caused the wooden round to move vertically like a paddle. When you saw "grains" on the wooden handle, you knew you were starting to form butter inside. There tend to be rather large, holding a few gallons of milk, as they come from a time when people owned and milked their own cows.  There were also version where it was a barrel that was turned, sort of like a big milk tumbler which could churn butter.

More Victorian and early 20th century butter churns were made using glass jars, which let you watch the process more precisely and which churned smaller amounts of butter once people started to not live on farms and get milk via local delivery. These had a mechanism on top that had a handle which turned a paddle inside the jar, much like an early version of hand mixers.

See how a hand-cranked churn works

So, that day camp group butter project I mentioned in the introduction? We had a huge glass jar with a marble inside for agitation and it was passed around the circle of kids. Each of us shook it until we were tired and then passed it along. I absolutely do NOT recommend this method as 1) the glass marble cracked the jar and 2) it took way too long for the effort.

Most modern butter-makers are probably going to use a modern electric mixer. I suggest people try using a hand-cranked mixer, especially if you are starting out with pure cream. It really only takes about 10 minutes.

On my "wish list" is a proper butter churn, one of those glass ones that you hand-crank. Given that I can get raw milk so readily, the part of separating the cream and letting it sit for a bit isn't hard at all. For a small household, it's easy to make butter once or twice a week. Having a proper butter ceramic butter crock is the best way to store homemade butter. We have to keep our in the refrigerator as we have a cat with a butter fetish, who will jump up on the counter and lick to her heart's content if we leave any out.

You will also want some recipes on hand that require buttermilk, as making butter produces this as well.  This keeps for a long time and is very versatile so don't worry if you have to keep it around for a bit before you think of a way you'd like to use it.

Paddles - for draining, handling and shaping 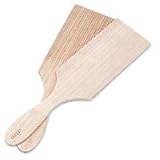 Birch Wood Butter Paddles 8.5 Inch
These traditional paddles are how the soft lumps of butter fat are pressed together and drained to form larger chunks of solid butter. You can't use your hands because the heat from them softens the butter too much.
Buy Now

How To Churn Butter

Le Creuset Stoneware Butter Crock, 6 oz., Cerise
Using a ceramic butter crock to store your homemade butter will keep it fresher for longer. A small amount of fresh water inside keeps your butter fresh and ready-to-spread without refrigeration.
Buy Now