It will be unthinkable for any South-asian household to avoid using turmeric (Haldi) in its food preparation since it is one of the most widely used spices. Turmeric is cultivated since centuries extensively in most of the SAARC countries. Its plant belongs to Zingiberaceae family and known by vernacular names like Haridra (Sanskrit), Manjal (Tamil), Halood (Bengali), Pasapu (Telgu) and Haldi (Oriya).

Common uses of turmeric (Curcuma longa) in the history find mention as a healing remedy besides condiment and textile dye. Its deep yellow-orange color, bitter peppery flavor and a mustard smell attributed to ingredient 'curcumin' makes it a choicest spice for preparation of curry.

Turmeric as a spice is available in the powder form prepared from rhizome, a modified underground stem. It is boiled first and then dried and ground to make the turmeric powder.Turmeric provides color and taste to food.

Turmeric is well known for its antiseptic properties. Recent research findings, appeared in the 'Journal of Nutritional Biochemistry' show that curcumin (the yellow ingredient in the turmeric) increases levels of a protein called cathelicidin anti-microcial peptide (CAMP) that is known to fight bacteria.

Researchers have opined that sustained consumption of turmeric in the diet at fairly low levels over time may protect against infection and keep people healthy.

For culinary preparations, it is an important spice that provides flavor and taste. Majority of the curry powders have turmeric as an important ingredient.

It is added in several other products such as ice cream, biscuits, sauces and canned beverages. It is used as a yellow food coloring agent since ages. 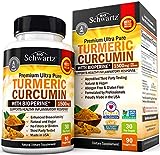 Relief from burns: Prepare a paste mixing turmeric powder with aloe vera gel and apply it on the burn for quick relief.

Pain reliever: Turmeric has been used traditionally in all the households of south Asia. Its used as pain reliever in case of sprains, ulcers and toothache etc. It is used both internally and externally. One tablespoon of raw turmeric powder mixed in hot milk is administered to the people having pain due to sprains.

Relief from flatulence:Turmeric helps in prevention of flatulence and also providing relief from the same.

Cure intestine & nervous problems: It is very effective in intestinal problems like chronic diarrhea. It is reported to be of special significance in curing hysteria and convulsions.

2. Asthma, cold & throat problems: It is used to prevent the asthma attack and provide relief from it. If a glass of milk mixed with a teaspoon of turmeric powder is consumed twice or thrice daily, it provides great relief from bronchitis asthma. Inhaling the smoke of burning turmeric increases the discharge from the nose and provides relief from running nose if a person is suffering from cold. People suffering from chronic cough and throat irritation may find relief from it drinking 30 ml warm milk mixed with half a teaspoon of turmeric powder. Juice of the turmeric is very effective in treating scabies and ringworm.

Turmeric powder paste is used to get relief from sprains, thorns and swellings. Application of ginger and turmeric paste (1:1) prepared after heating the ingredients provides relief from muscle strain.

Toothache and swelling of gums is eliminated by massaging with roasted turmeric. It is an important ingredient of homemade mouthwash to provide instant relief from toothache. It may be prepared boiling 200 ml water mixed with 5 g of turmeric powder, 2 cloves and 2 dried leaves of guava.

It provides relief from insect bites when applied externally making paste with lime. Application of powdered mix (2 teaspoonful turmeric powder with 1 tsp salt) is reported to reduce the inflammation and swelling.

Prepare a mixture of turmeric powder with coconut or castor oil and apply it on cracked heels 15-20 minutes before taking a bath.

Drinking a cup of warm milk mixed with half tsp of turmeric and a pinch of saffron is reported to be prescribed as a home remedy to stop internal bleeding.

Drinking twice or thrice a day a glass of hot water along with 1/4th teaspoonful turmeric powder is prescribed as a home remedy to Jaundice patient.

Research studies in past suggested that 'curcumin' could stave off Parkins disease. However, research team led by biologist Sarat Chandra Yenisetti of Nagaland University, India, in a new study, appeared in the International journal Rejuvenation Research, has demonstrated that the curcumin failed to protect ageing brains from Parkinson's disease.