How often do you crave chocolate?

I gaze into my cup of foamy dark chocolate and smell the spicy aroma of cinnamon mixed with nutmeg and vanilla. Then, I taste the creamy beverage, just a sip. Immediately, I feel a gentle warmth flow through my body and if you look close you can see my toes curl! There's nothing quite like a mug of Mexican Hot Chocolate to start your day or to cap it off royally.

When my older sister married she insisted upon toasting with Mexican Hot Chocolate (also called Champurrado) because it was a tradition our family followed. The guests were delighted with the idea and cups clinked all around in honor of the couple's wishes. As children, we would enjoy the beverage on New Year's day with other traditional foods like empanadas and bunelos. My mother served it to Sunday company as an after dinner drink in large mugs. And, on occasion, she would offer a cup when one of us was sick, needed a perk-up or just for fun. You see, Mexican Hot Chocolate is a specialty drink among Hispanics and the process from beginning to end takes a little time and some effort; therefore, when you indulge in the drink you know it has a special meaning.

Source Of The Real Flavor Of Mexican Hot Chocolate 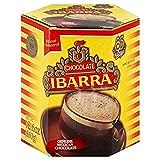 A Little History and Trivia

Natural chocolate is an antioxidant, may lower blood pressure, improve blood circulation and contribute to one's positive health such as a decrease in negative feelings. The flavenois and flavenoids in chocolate can exhibit benefits similar to fruits such as blueberries and prunes. A study through Dr Shock, MD, PHD shows that ninety-seven percent of women crave chocolate compared to sixty-eight percent of men (being a chocolate lover myself, I can see the truth of this statement!). There seems to be a higher percentage of pre-menopausal women who crave chocolate and the cravings decrease in post-menopausal women. The chart below depicts the statistics of women ages forty-five to eighty who crave chocolate. Notice the cravings of chocolate in general remain high, between eighty and ninety percent, across the graph. Yes, women need (crave) chocolate and I have heard doctors state that two ounces a day does a body good!

A Molinillo Is Fun To Use In Making Mexican Hot Chocolate! 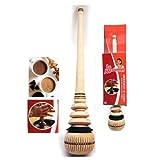 There are several recipe versions of Mexican Hot Chocolate on the web, youtube, cooking shows, and probably every Mexican family you ask will have their own recipe. The most popular brands of chocolate used are Ibarra and Abuelita (Nestle) which include spices such as cinnamon in the ingredients. The product comes in wheels that must be broken or crushed before cooking. The picture below shows an example of the packaging and form. By the way, some grocery stores may carry these brands but you may have to make a trip to a Mexican grocery store or order it on the web. If this is not possible, any semisweet or bittersweet chocolate can be substituted.

The ingredients will also vary but generally include milk, chocolate, cinnamon, vanilla, and sugar. Depending upon the health content concern, I will vary my milk from whole, 2%, condensed, evaporated, or almond. My family prefers the rich, sweet evaporated milk over the other choices because it gives it a thicker texture. Some cooks choose to add a little chili to the mix for extra zing and top it with whipped cream and nuts. Although traditionally it is served without whipped cream because the beauty of the drink is seeing the froth on top.

And of course, you must use a whisk or hand-mixer (an old fashioned egg-beater works great) to create the foamy froth that gives it the traditional look! Below is a picture of a special wooden tool called a molinillo that Mexicans use to create the frothy finish of the drink. This tool is handy and if you have guests who like to participate they can use it to help out in the preparation. It is quite fun, you simply rub the handle between your hands quickly to whip the chocolate. Molinillos can be ordered on the internet or found in Mexican grocery stores.

Combine both milks, cocoa, sugar, nutmeg and cinnamon stick in a medium, heavy saucepan over medium heat. Scrape seeds from vanilla bean; add seeds and bean to milk. Cook for 25-30 minutes or until thoroughly heated and cocoa is melted, stirring frequently. Remove from the heat. Strain mixture into a bowl; discard solids. Using a whisk or molinillo beat the chocolate milk until a froth forms. Divide into mugs for serving. Sprinkle with cinnamon.

Optional: Can serve with cinnamon sticks or bunuelos as stirs, top with whipped cream and nuts or marshmallows.

So the next time you crave chocolate and feel adventurous, try a cup of Mexican Hot Chocolate. It's not just comfort food. It's liquid health and pleasure in a mug!