When I first married, I was really afraid to try to make potato salad. It sounded so complicated, with all different variations and ingredients. I didn’t know where to start. After a little trial and error I have come up with what my husband says is the best mustard potato salad ever made and it’s really easy to make. I prefer to make it with red potatoes but russet potatoes work well also.

I put a little twist on my recipe by adding Hidden Valley Ranch Salad Dressing instead of mayo or Miracle Whip. My husband had asked me to leave it out as he didn't like mayo, so I used the ranch dressing instead and he never knew the difference. He thought it was delicious! I think it just adds a wonderful flavor to the potato salad. I also prefer to use dill pickles and pickle juice rather than sweet pickles for my mustard potato salad.

Potato salad has been a staple throughout various countries of the world for years. Every country as well as every restaurant or family has their own version of their favorite potato salad. Potato salad is actually considered a side dish rather than a salad as it usually accompanies the main dish. But I could sit down and make a meal out of good potato salad!

Potato salad is a favorite dish at bar-b-ques, picnics and other outdoor eating events. It is a great dish to serve with hamburgers, hot dogs, fried chicken and almost anything cooked on the grill. It is a favorite for people that are cooking large quantities of food as it is easy to make in large quantities. Doubling this recipe will make enough mustard potato salad for a crowd.

You May Also Enjoy: 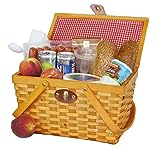