Why make your own ice-cream

The question has to be asked, with so many brands,some of them premium and really tasty, why bother making your own ice-cream? Obviously I do it for fun, not because I have to. I have always loved making foods that one usually buys in supermarketsm from scratch. Very often it is much simpler and quicker than you think it would be. It is nice to be known by friends as the "expert" who makes very specialist dishes, while knowing that there is nothing complicated about making them. Take ice-cream it is basically frozen custard, the basic ingredients are:

And then some flavouring. In the case of vanilla ice-cream the flavouring is basically vanilla. Not so complicated really.

The other reason is of-course the taste, and also knowing exactly what ingredients go into the dish. I don't pay as much attention to healthy food as I should, but if you read the list of ingredients on a tub of shop-bought ice-cream you will be amazed at the things they put in there.

Finally, I feel there is a "family tradition". As a child I remember being told by my Mother, how my Great Grandmother, used to make and sell ice-cream during the war and afterwards (WWII, in Poland) and how the money she made allowed her family (7 children) to survive. She lived to a pretty old age, I did not know her very well, since I was by then living in a different country, and when I did see her, she was just an average old woman, not a particularly inspirational figure, but when I make ice-cream I often think about how hard it was for ordinary people during that time and how they survived through their own obstinacy. Incidentally both my Mum and my Aunt agree that the ice-cream was delicious.

The flavour: Sherry and Raisin

This started off as my attempt to reproduce Haagen Dazs rum and raisin. When I lived in the US several years ago, I loved this stuff, I ate it by the bucket (still have some of it on my hips today). Although there are many Haagen Dazs flavours in the UK, I could never find my favourite and the other brands didn't taste good. Therefore I decided to make my own. However when I tried my version, I did not like it very much, the alcoholic flavour of the rum was very raw, probably because of the brand I was using. But then I read a recipe with Pedro Ximenez sherry in place of the rum. This is the sweetest kind of sherry, it's not really something I would drink on its own, too cloying, but it does actually taste of raisins itself and is brilliant in this recipe

Do you need an ice-cream machine?

Yes. This is the one complication in ice-cream making. You can try without, I tried many times, taking the ice-cream out of the freezer at intervals and whipping it, but I never managed to get it to freeze without crystals. If you just put custard into the freezer, the water in it crystallizes, to get a smooth creamy texture, the mixture needs to be churned constantly while freezing. If you have ever tried ice-cream that had melted and was frozen again (which you should never do, there is a big risk of food poisoning), you will know what I mean about the texture. The only other way of making smooth ice-cream is by freezing it very quickly, using liquid nitrogen. Believe me, ice-cream machines are much easier to get hold of, and much safer, liquid nitrogen should be used with great care, wearing face protection and only by people who know what they are doing. So go on, bite the bullet and if you don't have one, buy it. You will have fun (and great ice-cream)

Basically you have two choices, cheap and cheerful, with a bowl that you have to cool in the freezer before using, or expensive ones that will do the freezing themselves. Depends on your budget. I have the cheap kind, it works brilliantly. The only two things to keep in mind is that you need space in your freezer to fit the bowl and you need to plan ahead, you need to pre-freeze at least 24 hours ahead of making the ice-cream. Also handle the frozen bowl with care, use an oven glove or at least a dishcloth, you can burn yourself on very cold metal (I know that sounds strange but it's true. 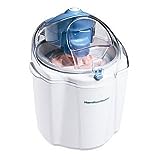 Ok so here's the recipe:

At least 24h before you start put your freezer bowl in the freezer.

A few hours before you start take a couple of handfuls of raisins (150g but I don't really weight them out tbh), and cover them with Pedro Ximenez sherry and leave to soak.

Time to make the custard:

1. Put the cream, milk and half the sugar (you don't have to be exact) into a medium pan

2. Split the vanilla pod, scrape out as many of the seeds as you can into the milk/cream mixture, then drop in the pod.

3. Heat the cream/milk mixture over low heat until almost coming to boil, take it off when bubbles start forming at the edges, leave the vanilla to infuse until mixture is cool.

4. Put the egg yolks with the rest of the sugar into a bowl and beat with an electric whisk for about 2 minutes until foamy and pale. The mixture should be thickened so that when you take out the whisk the mixture should fall slowly in a thick ribbon.

5. Add some (about 3fl. oz) of the cream/milk mixture into the egg yolks and mix so they become more fluid.

6. Reheat the cream/milk mixture until it just comes to boil, take off heat, add the egg yolks slowly mixing with a wooden spoon all the time.

7. Heat the custard again, over low heat, stirring all the time until it is thick enough to coat the back of your wooden spoon (about 8-10 minutes). Make sure it doesn't boil. Don't expect it to be very thick at this point, it will thicken and solidify more as it cools.

8. Leave the custard to cool, stirring occasionally to prevent skin formation. You could put it into a water/ice bath to speed up the process. When it is room temperature, put it in the fridge to cool further.

9. Take out the vanilla pod, start the ice-cream maker (it is a good idea at this point to follow the instructions that came with your particular machine if they differ from here. Slowly pour the custard into the ice-cream maker and leave to churn until it starts looking like very soft ice-cream.

10. Add most of the raisins and the sherry they were soaking in to the ice-cream. Leave some behind for garnish.

11. Churn for another 5 minutes, take the ice-cream out of its maker, put in a tupperware container (or an old ice-cream tub) and put in the freezer.

12. You now have to wait a few more hours for the ice-cream to freeze properly. You shouldn't expect it to harden completely in the ice-cream machine (in fact leaving it too long might burn the machine as it becomes too hard to churn.

13. Garnish with the remaining raisins and sherry, you could provide some more sherry for pouring over.

Enjoy! If you have problems finding the sherry, you can experiment with other alcohols. Or just make vanilla ice-cream and try it with some tia maria (for example) poured over.

Obviously this is a grown-up dessert. But if you want to make ice-cream for children, just make the basic vanilla and experiment with flavourings and garnishes.

This is the only tricky part of the recipe. If the custard boils, or you add the eggs too fast to hot cream/milk, the custard might curdle. But I don't think this is so tricky, I've heard of custards curdling but it has never happened to me. Just keep stirring, and don't let it boil.