It's always a bit of a thrill to come up with a new cupcake recipe, and these orange and cinnamon cupcakes are sure to become a firm favourite.

Cupcakes are a treat, something a little bit 'naughty' but very nice. They should light in texture, full of flavour and topped with some form of sticky goodness.

Orange is a lovely flavour for cakes of any description, but isn't a particularly strong flavour, hence the use of both the zest and the juice in this recipe as the oils in the zest hold a lot of the 'zing' you're after with an orange flavour. Cinnamon is a strong spice and is used sparingly in this recipe to add a hint of spice but without overpowering the orange.

The other main difference in this recipe is the used of soft dark brown sugar as opposed to caster. The dark sugar gives a richer colour and flavour to the cakes, which suits the zingy zest of the orange and the cinnamon spice.

zest and juice of 2 oranges

Place on the middle shelf of the oven for approx 17 - 20 mins or until cooked then remove from the oven and allow to cool before icing.

To make the icing place a few tablespoons of icing sugar in a bowl and gradually add the orange juice, stirring all the time. Keep adding either orange juice or icing sugar until you have a thick but runny icing to drizzle over the cakes.

Decorate as required, then eat and enjoy.

Best Baking Equipment to Use

The right equipment makes a huge difference to the results of your baking.

If using muffin tins these should be sturdy and of good quality to allow the heat to distribute equally around the cupcakes. Using low quality muffin pans can result in unequal heat distribution which can mean over-cooked or burnt cakes on the outside while they are uncooked on the inside.

Silicone cooks well but due to its flexibility is better in trays of 6 than 12 (the last thing you want is cupcakes falling out all over the place).

Mixing bowls should be large enough that have room to 'fold' the mixture and allow air into it, rather than just stir.

For small amounts of mixture (like this recipe) a silicone spatula is great for mixing the ingredients, folding in the flour and getting every last drop of mixture out of the bowl - it doesn't all have to go in the baking cases, I'll a huge believer in the 'taste test' before a mixture goes into the oven. 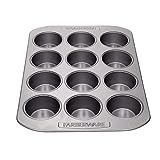 If a recipe uses butter to provide it's fat content, then it's possibly to swap the butter for sunflower oil to make the cakes dairy free.

Oil should be used at 3/4 the amount of butter so in this case you would use 3 fld oz sunflower oil instead of the butter. It is added at the same point in the recipe and none of the other instructions change.

As the butter in this recipe is salted butter you may find that when using sunflower oil, adding a pinch of salt to the recipe improves the flavour.