The Story of the Good-Looking Fish Pies

I asked my roommate, "Would you help me pick out the three most photogenic fish pies?"

Hmmm, now that's kind of an odd thing to ask, one might say. It's an example of one of the tiny but enjoyable ways writing has changed my life.

I wasn't thinking about creating a recipe or about writing an article when I picked up the frozen salmon filets at the grocery store. I was thinking about the apple-wood smoked sea salt I'd just picked up on special the week before. I was thinking about the sustainability of the fishery versus the fantastic price-per-ounce value of the package. I was thinking how a soak overnight in some marinade with liquid smoke, low sodium soy sauce, fresh garlic, ginger and a squeeze of lemon would be just the thing to really get the flavors to penetrate the fish. I wasn't even considering writing anything on any of those subjects but that little columnist was sitting in the back of my head typing wildly. The rest of me was deciding how to make the best culinary use of mineral crystals condensed from seawater with smoke, utterly oblivious to the silent clicking of an imaginary keyboard.

As the next day progressed and the two lovely salmon filets sat in my refrigerator soaking up flavors I developed a craving for some crumbly pie crust. I was feeling under the weather that day and not up to making a bunch of different things so I decided to combine the two cravings into a single dish. I also considered the fact that two salmon filets won't go very far with four diners.

Cooking is a bit of a free-form art for me. I have a fairly decent knowledge of food science and a good memory for flavors. I take those two elements and use them to decide which things I have on hand will taste good together and which can be combined without creating a culinary disaster or disgusting results. In other words, I went into my kitchen only knowing I was going to make some kind of pie crust with salmon on it or in it and winged it.

It became the recipe below and we devoured all twelve of the little pies it turned into, even the three most photogenic ones, which were not tremendously beautiful, anyway.

Cut the salmon filets into bite-sized pieces. Place them in a non-reactive container with the liquid smoke, low-sodium soy sauce, smoked sea salt, lemon juice, and ginger and mush it around a bit to make sure all of the salmon touches marinade. Cover and refrigerate, preferably overnight.

When the salmon has marinated to your satisfaction and you're ready to make the pies, melt a tablespoon of butter in a large frying pan or skillet over low heat and add the salmon, marinade and all plus two tablespoons of water, to the pan. Cook on low until the salmon is slightly underdone then remove from the heat. Remove the salmon from the pan, leaving the marinade and juices behind.

Add the cream cheese and goat cheese, stirring well and scraping the bottom of the pan to get all the flavor. Add the shredded cheddar cheese and stir it in. Add the eggs last and stir very well so the whole thing is very blended.

Getting the Crust Started:

Put the flour into a medium mixing bowl and stir in the 1/2 teaspoon of salt. Thinly slice the 3/4 cup butter with a sharp knife before adding it to the flour. You can cut the butter into the flour with the same knife a strong metal spoon. A food processor could also be used for this step. The idea is to get the butter mixed thoroughly into the flour before it all reaches room temperature. It should look sort of like sand by this point. Cover it and refrigerate it until you are ready to put the dough into the pan to bake.

When ready to put the crust dough into the pan, stir in half a cup of water. Use a serving spoon or disher to put twelve even portions of dough in the twelve sections of the twelve brownie pan or sixteen even portions if using a greased and floured standard-sized muffin pan then press the dough until it lines the hollow. Prick the bottom and sides of each with a fork to let air out of the crust in the baking process.

Scoop equal portions of the filling into each pie and top with grated Romano, Parmesan, or Asiago and pine nuts that have been lightly tossed in olive oil to encourage tasty browning. Bake at 350 degrees for about twenty to twenty-five minutes or until the crust is lightly browned.

How did your pies taste?

Cast your vote for Smoked Salmon Pies with Pine Nuts

The Pan I Used to Get Square Pies 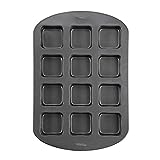 Wilton Brownie Bar Pan, 12-Cavity, Brownie Pan, Steel
If you'd like to make twelve little square pies like the ones pictured, you'll need a pan like this. However, the recipe works just as well to make 16 of them using regular-sized, round muffin or cupcake tins. I prefer the slightly more substantial size, but regular-sized or even mini-muffin sized pans might make a better size to make mini-pies to serve as party hors d'oeuvres.
Buy Now

Writing the Story of Food Improves the Cooking of Food

When I decided to write about my kitchen experiments some years back, I discovered an unforeseen benefit. Once upon a time, I invented new dishes in my kitchen, never to replicate them quite right again. When I started writing things down, that changed; writing also changed the way I look at everything I do.

Everything has a story. Sometimes those stories call out to be written; I tend to listen nowadays even if the calling comes from a decadent bit of fishy pastry.

I have to say writing has really improved my cooking. It has also become such a part of life that my roommates and other close friends now comply to strange requests such as sorting fish-based baked goods by their relative esthetic appeal without batting an eye.