Flatbread has been a staple food of mankind for a very long time, since 4,000 BC to be exact. Evidence of this has been unearthed in Iraq and discovered in writings on Egyptian tombs. Consisting mainly of grain (all-purpose flour, whole wheat, corn, rye, barley, rice or millet), water, and, salt, these breads were quick to make. The dough was shaped and baked on a stone in the sun or in a dirt or brick oven. Flatbreads can be leavened or unleavened, single or double layered. Actually, single layered flatbreads can be both leavened and unleavened. The double layer bread is leavened and made to rise twice or three times depending on the type.

Historically, the versatile flatbread was eaten at every meal with sauces, stews or as fillers, pockets, and wraps. It even played a part in some of the world’s religious rituals. Ancient Egyptians, for instance, included it in tombs, so their dead would have food in the afterlife. It also has prominence in Christianity as in the Last Supper event with Jesus. Flatbreads of all kinds are found in every culture around the world. Some of the best and most popular are found in countries along the Mediterranean. 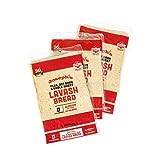 Pita is usually associated with Greek cuisine in the West, but it is a staple in Middle Eastern and Balkan cooking. This double layer flatbread is made from flour, water, yeast, and salt. The dough is molded by hand into oval or round shapes which could be of varying sizes. It rises quickly with fermentation and then again in an extremely hot brick oven. Steam balloons the middle of the expanding dough, leaving a pocket after the bread is baked, cooled, and flattened. Depending on the culture, the pocket is filled with lamb, other types of meat, falafel/ fried chickpea balls, hummus, cheese, salad ingredients or vegetables. It is eaten as a sandwich or as a scoop for stews and sauces.

Lepinja, often spelled lepinje, also called somun, is another Eastern Mediterranean favorite. Basic recipe includes flour, water, dry or fresh yeast, baking powder or baking soda, sugar, and salt. The dough is made to rise three times before balling and flattening into whatever size lepinja the cook wants then baked at 425 degrees Fahrenheit (F). The flatbread is then sliced open to reveal a soft or spongy interior which can be filled with seasoned meats, cheese or eggs. Natives of the region especially love it with a meat dish called cevpcici also spelled cevapi.

Lavash. There are several derivations and definitions of this word. Most think it is of Armenian origin and like a lot of that culture’s cuisine; this unleavened, single layer flatbread has been around for at least 3,000 years. It even plays an important role in their spirituality. A website devoted to the flatbread explains that Armenians define the word as life and wisdom. The basic ingredients in lavash are flour, water, dry yeast, salt, and olive oil. It comes in round or oval shapes and varying sizes. Texture can be very soft or very crispy. If stored properly for instance, sealed in a plastic bag and refrigerated, the flatbread can last a good 10 days. However, it is usually made to be eaten in the first two. It is eaten as a wrap, a sandwich or as a scoop for dips and other meals.

Focaccia is the precursor to pizza and may have originated in Greece. It was originally baked in a hearth which was located in the middle of the home, so the Latin word could literally mean focus or refer to a fireplace. Heated tiles or baking stones were also used to cook this popular Italian flatbread. The basic recipe calls for all-purpose flour, water, (dry) yeast, sugar, table and coarse salt, olive oil, and fresh herb: basil, rosemary or sage. The well-oiled dough is made to rise three times for a crispier, thicker crust -though some recipes call for only two rises- then baked at a temperature of at least 450 degrees F.

Focaccia tends to be oily because part of the preparation process involves creating crevices or indentations with the fingers in the dough before basting it with oil. The flatbread’s culinary versatility allows you to top it with various herbs, vegetables, cheeses or meats and eat as a full meal, snack or appetizer. It can also be topped with honey, raisins or sugar for a sweet version. Many countries, far and wide, have concocted their own recipe with its own name. For example, Argentina’s focaccia, which is usually topped with sweet cooked onions, is called fugazza.

Coca is the Spanish flatbread which comes from the region of Catalonia and the Balearics. Traditional coca was unleavened, contained lard (pig fat), and cooked on a baking stone or in a brick oven. Today, some recipes use dry yeast and sugar and require a three-time rise. The basic ingredients are all-purpose flour, water, salt, and olive oil, maybe cornmeal for dusting. It is baked in a 475 to 500-degree F oven. Coca as with other Mediterranean flatbreads is often compared with pizza, but it has lighter dough. It can be shaped oval, rectangular or square. The texture can be flaky and dry or spongy. It is usually topped with everything but cheese. Savory versions have ham, sausage, bacon, anchovies, sardines, cod, caramelized onions, roasted peppers or olives. The sweet versions may be covered with dark chocolate, pine nuts or dried fruit.

In Spain, coca is part of the famed Spanish tapas and found in like-named bars around the country. It is also associated with the Christian Lent, being eaten prior to the season and with the feasts of saints, being named for some of them.

Tarte Flambee is one of the French versions of flatbreads. It is also called Flammkuchen, a German word literally meaning flame cake. It comes from the Northeastern part of France which borders Germany. The flatbread was usually cooked in a wood-fire oven, says the online free encyclopedia, Wikipedia. The website also credits farmers from Alsace –France, Baden –Germany and Palatinate –Pfalz, Germany with its invention.

Though tarte flambee is traditionally unleavened, there are yeast varieties. The basic recipe calls for all-purpose flour, water, salt, and oil. The flatbread’s dough is rolled very thin and shaped into a circle or rectangle before baking at about 500 degrees F. Edges are quite crisp when done. Toppings include crème fraiche, white cheese, lardoons (strips of pork fat), mushrooms, other vegetables, caramelized onions, or sliced fruit as apples, cinnamon, and flambéed with a sweet liqueur.