Lancie, aka theresnothingtodoinperth (TNTDIP) on Zomato, posts full-length reviews of the only thing to do in Perth: eat! 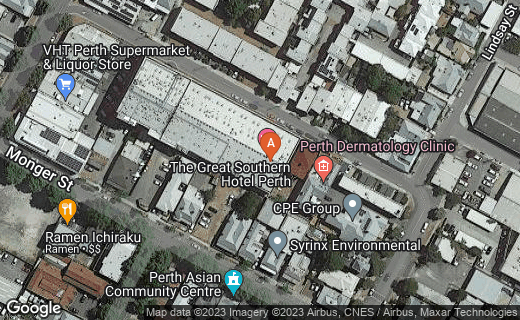 There's nothing to do in Perth... besides eating average but exceptionally priced Japanese food.

On 26/7/2016, my girlfriend took me out for lunch. The occasion was my birthday, and the location was Restaurant 1903. She had found a Groupon deal: $39 for a three course meal with wine for two.

Neither of us had heard of the place before, but Japanese food on the Chinatown side of Northbridge was a safe bet.

Our first impression was mild surprise. While we drove around looking for parking, we had kept our eyes peeled for any sort of signboard or marker; it took the help of Google Maps for us to realize we had passed by it a couple of times.

As it turned out, Restaurant 1903 was connected to a hotel—more specifically, the Great Southern Hotel Perth. It was quiet in the foyer. Late morning sunbeams glared through the transparent glass windows, warming the still air.

It had been a while since I last stepped foot in a hotel. The heavy curtains, breakfast buffet cloches, now vacant, and matching salt and pepper shakers really took me back.

We were offered menus, and our server, a kindly old Singaporean man who was likely the co-owner, explained to us how our Groupon voucher worked. Any two entrees, any two mains from the bento or noodles section, and any two cakes from the fridge. We also had a choice of house red or white.

The bentos (deluxe, as of opposed to standard) were the best option by far. Salad, sushi, rice, and meat—the traditional formula was a winning one.

First up: the entrees. Most of the choices were pretty standard: takoyaki, tempura prawns, chicken karaage. What immediately caught my eye, though, was the soft shell crab! It was tempting to just get two of those, but we opted to get the spicy squid instead.

Verdict: To our delight, the squid, despite not being spicy at all, held its own against the soft shell crab. Both were fresh, crispy and delicious. If you considered their individual pricing, the size of the portions were not fantastic, but as part of the package it was more than great. Probably our favourite part of the meal.

Just before we finished our entrees, his wife brought us the sushi on a separate platter, accompanied with soy and wasabi. The platter was an interesting touch, as we expected it to be in a compartment within the bento box as is the norm. The sushi itself—cooked tuna—was just okay.

Then came the mains, and this was exciting. I had been craving it for a while, so I did not hesitate to order the unagi (eel), while she got the tempura prawn. My slab of unagi was delicious, creamy and bone-free, slathered in that amazing teriyaki sauce enriched with its juices and fat. Dear heavens do I love unagi.

Her tempura prawn was pretty good as well. There were four nice large pieces in crunchy batter, delicate enough to let the prawn come through.

The rest of the bento was a good fit to the meat. The seaweed salad was chilled, a fun offset to the steamed rice and takoyaki. The lettuce was fresh and crunchy, too. We did not expect to take to the fried vermicelli as much as we did, but again, delicious unagi sauce.

Normally, a bento of this size would have been fine by itself. The rice was nice enough and the salad was unpretentious, sufficient; the orange slices were a surprise and did a great job as a palate cleanser. Normally, a bento of this size would be satisfying. However, we had loaded up on crab and squid and sushi, so the result was unfinished rice on her end and barely finished rice on mine.

We were pretty much stuffed. I got up to ask for some water, as I was a lightweight when it came to wine, and she was our driver today, and we jumped from topic to topic as our bellies churned away.

Initially, it was a bit strange as we were the only ones apart from the owners there! But, as time passed, we got comfortable, and chatted happily, on and on... and on.

I got up to ask for more water and the lady noticed at last that we were ready for dessert. She brought the menus to us once again, and we made our picks: chocolate mudcake for me, red velvet for her.

The cake was not the best, but then again we were not the best of cake connoisseurs. I felt that both cakes were dry, and my chocolate mudcake was too clammy even for mudcake. The ganache was nice. Meanwhile, the red velvet had a more fun flavour. but the icing was a tad too buttery. Something of a disappointing end.

We were asked about how everything was, and we honestly said that we enjoyed it. She explained how the place was new, hence what must have been a cutthroat promo.

On a tangent: did you know that Groupon takes up to 50% of what you pay through them? My girlfriend was the one who mentioned it, and I was shocked: they only got $20 in exchange for four plates of fantastic food, two glasses of wine and two slices of cake. Geez.

Anyhow, we gained two piece of information before we left. The first was that it didn't have to be wine—we could ask for tea, coffee or soft drinks as well, which would have been a better complement for the rich cake. The second was that they were doing the $39 deal for anyone who called by, outside of Groupon, and I think that is something worth sharing.

(I might as well mention that no, this isn't a sponsored post. I wish it were, though!)

So, then, to sum it up: for $20 a head, we got a three course meal with wine. The visit is absolutely a value deal, so if you're looking to entertain guests, friends or loved ones (before the end of October 2016), here's something that's good enough to appease tastes and cheap enough to not break the bank. If, however, you're looking for new heights of culinary experiences, you're better off trying Zomato's top-listers.

Service: 3/5. We had to ask for our own water and dessert took an awkward while, but they were friendly.

Food: 3.5/5. Varying levels of quality depending on what you order. Go for the big token dishes and you most likely won't be disappointed.

Do you live in Perth? If so, are you interested in giving Restaurant 1903 a go?