Born in Ohio, Guy Fieri grew up in Ferndale, a small town in Humboldt County - a northern county of California. Ferndale is a small, sunny town that has outlying farmland surrounding it. It truly feels like you're in the middle of nowhere out there. Maybe this is what encouraged Guy Fieri to travel to France on a student exchange program - the birthplace of Fieri's interest in the food industry. But Fieri was always interested in food itself. Stories of Fieri and food date back to his 10 year-old days selling pretzels from his bicycle. Fast forward years later and Fieri opens his second restaurant called Johnny Garlic's, in Windsor, California, in 1999, and subsequently becomes a "chef" of the Food Network. Much in the same vein Rachel Ray is not exactly a real chef, neither is Guy Fieri.

Fieri is not a traditionally trained-chef. He never went to culinary school, he never studied under another master, he never attained his credentials, he doesn't run kitchens - even if he does run restaurants. Yes, he knows how to cook - but so does my grandma. That doesn't make her a chef, either. A chef is someone who studied and apprenticed under another chef - that top dog in the kitchen with the red seal that says he's a real chef and barks orders to the underlings while they scurry frantically to get it done perfectly - lest the chef chop off their heads. Other chefs run Fieri's kitchens. Fieri doesn't have that red seal. He rose to acclaim after winning a contest on the Food Network. His appeal is his ability to attract a large audience due to his slightly rough around the edges but completely typical down-home American personality - a personality unlike many other celebrity chefs and more akin to the masses. In short, he is one of them.

Having said all that, Fieri certainly knows his way around a kitchen. He definitely knows about the food industry. Fieri is a pro at running restaurants. He is politically savvy - a skill in the restaurant business - and Fieri has used this savvy to raise awareness of healthy food practices. He is patriotic and has completed tours for the troops. He gives back to local communities. But is he a nice guy in real life? The sources I've spoken to remain divided. Some say he is wonderful and kind. Others say he a word that rhymes with "ick."

In another small town in Northern California, Guy Fieri opened his second restaurant named Johnny Garlic's, in Windsor. The ambiance includes wooded tones, two raised booths, a small bar area and a darkened dining area with mood lighting. Sitting on a quiet, unassuming end of a small shopping center, it is frequented by locals and occasional tourists.

Party of Four - At Johnny Garlic's in Windsor

When I asked for the alligator dish, they didn't have alligator - a product sold year round in other restaurants. According to the waiter, they never have it in stock. So, why is it on the menu? Strike one. Then, I asked for the gluten-free pizza listed on the menu, since one person with us has a gluten allergy... But, they were out of gluten-free pizza dough. Strike two. A third strike and we would have been out of there! 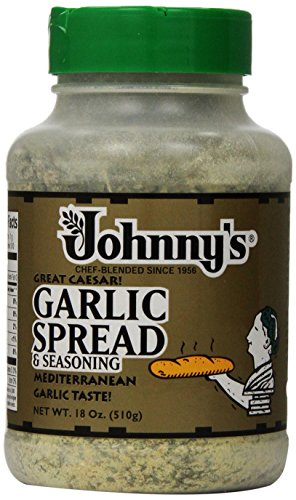 Large Portions With Every Entrée

Drinks were served timely and refilled consistently throughout the visit. The starter was a Pork Flatbread with leeks and a desirable presentation of nine bite-size portions - a very good beginning. This was followed by a long wait for the entrees. The Shrimp Scampi was a generous serving of shrimp on cappellini, enhanced by the light flavor of lemon. The Gluten Free Shrimp Scampi was acceptable but not served on the traditional cappellini noodles. While the dish was delicious, the presentation left a slight disappointment as both the patrons eating the Shrimp Scampi dishes were seated side by side and the difference in quality and presentation was evident. The staff also forgot the lemons in the Gluten Free Shrimp Scampi dish. The Big Bite Burger was extremely huge and the undertaking of eating it was suitable for the champion eater from 'Man versus Food.' We had a man with a large appetite with us who said he was barely able to finish it and that he thoroughly enjoyed it. It was very tasty, served well and had an excellent presentation, paired with standard fries. The Buffalo Meatloaf Sandwich was also well-made and paired with perfectly done garlic fries. The Buffalo Meatloaf Sandwich did not ooze sauce over the sides, as is common in poorly prepared meatloaf sandwiches, and this was a definite plus.

The unfortunate drawback of the dining experience is that, while we arrived before many patrons, we were the last ones served. The people seated next to us arrived 10 minutes after we were seated - yet were eating 20 minutes before we were. We waited nearly 45 minutes for our entrées to arrive from the time we sat down.

Overall Review: While the food is quite good, the service time is sub-par. The waiters are friendly but do they need more to keep up with patrons? The food is wonderful but do you have to wait almost an hour for it? This would not be my first choice if I was very hungry or if I was entertaining out of town friends - because of the wait time for service. Hopefully, this location improves their service skills because the food is delicious and all ingredients are present for a five star experience - if only they can season their restaurant "just right."

An Inside Look at Guy Fieri

Did You Find This Review Helpful?