I am trying to be a “minimalist” and my husband is a “prepper” so we are the complete opposites but I guess it balances out. He is always buying things which then sit in our living room unopened collecting dust. His latest purchase was a Hot Air Fryer that he said he wanted to use to make french fries and fried chicken.

He actually opened this box but the fryer has now been sitting on my counter for 5 weeks unused and with dust starting to collect. And no we have not had any fried chicken or french fries home made or take out.

Instead of getting frustrated I decided to dust it off and test it out.

As I am currently on a diet and trying to avoid fried food, this was the perfect time. I also needed to make something to take to a going away party, so decided on Vegetable Samosas.

Very Easy to use - 2 Dials to Operate Fryer

The instructions were very simple as the machine has only one timer and one temperature dial to operate it.

You have to pre-heat the fryer for 3 minutes at the temperature that you intend to use or just add 3 minutes to the cooking time if you don’t want to pre-heat it.

The fryer instruction booklet gave a temperature of 390℉ and 8-10 Minutes cooking time for Spring Rolls, which are basically the same as samosa’s, just a different shape.

The frozen samosa instructions said to heat oil to 392℉ and 375℉ as I had two different brands I was cooking. So the temperature was pretty much the same if I had used oil instead or air to fry them in.

Cooking time in oil was a little less at 6-8 Minutes and 5-7 Minutes.

For my first batch I put 5 inside the fryer and I cooked them for 5 minutes. The instructions said to shake them in the tray half way through cooking but I wanted to turn them instead, the same as I would usually do when frying in oil. So once turned, I then set the timer for another 5 minutes to finish cooking.

I was worried that they might stick but they didn’t.

10 Minutes and Samosa's are Ready

Usually if frying, I would have to stand by the stove the whole time to watch the pan but these I could put in the fryer, turn on and go and do something else. There is a bell sound when the timer finishes so you can hear when it is time to turn them over or they are done.

I also realized I could fit more than five in the tray and was actually able to fit a whole box of ten samosa’s in at a time. So I was able to make 50 samosa’s in less than an hour. Maybe I could have fit more but I didn’t try this time as didn’t want to mess any up as taking them to a party.

We went to the party and everyone loved them. They were not greasy, so people didn’t even need a napkin when grabbing one. Usually they are very greasy as they soak up a lot of oil if frying the regular way. Sometimes they also break apart in the oil but air frying keeps them completely in tact.

Honestly I did not have high expectations for this contraption but I was pleasantly surprised especially when we came home and there was no smell of samosa’s. When I have fried them in the past it would take 2 days for the smell of curry to leave my apartment.

Also there was no oil to dispose of. And clean up was as simple as just putting the pans in the dish washer. They fit on the top rack.

I did not know anything about dry frying until I saw the fryer sitting on my counter top and I would have told my husband absolutely not to buy it if he had told me before hand that he wanted it.

I don't think eating 5 samosa's helped my diet but it was definitely better than the regular deep fried version.

I am not sure if there is anything else I want to try in the air fryer as of now but I can say that I am happy to have this in my kitchen for cooking samosa’s and maybe some other food ideas or suggestions will come up that I can try iA. 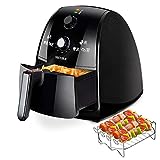