Roadkill and Other Bizarre Foods

You can just imagine those eyebrows raising as high as they will go and the look of total bewilderment creeping across the faces of your loved ones’ if you were to answer their hungry enquiry in this way! It is definitely fair to say that roadkill is not everyone’s idea of the perfect meal. Indeed, to most, the very prospect of eating some unfortunate animal that has come a cropper at the side of a country road would be viewed as out and out macabre.

But, yes you’ve probably already guessed it, there are some that would disagree with the majority on this. They believe that by eating the unfortunate animals that have met their maker in some horrific R.T.A. is an environmentally friendly way to consume food. It ensures that food is not wasted and that the carcass is disposed of in a more befitting manner.

Arthur Boyt, from Cornwall in the UK, is an individual who would definitely echo these sentiments. For many years now he has regularly eaten roadkill meat and he now admits that his freezer is becoming so chock-a-block full of animals such as deer, foxes and rabbits, that he is learning not to feel so guilty when he has to drive by another potential meal lying on the roadside.

No animals were harmed in the making of this. In fact the bunny is now living in the lap of luxury in a secret UK location...

Arthur has tried many different types of animals this way and claims that the strangest creatures he has tucked into were a greater horseshoe bat and even an otter. He admitted having tried dog too and likened the flavour of this meat to that of lamb. Needless to say that this would probably depend on the breed that is being consumed at the time. It would perhaps be doubtful that a great dane is going to taste exactly the same as a chihuahua.

Arthur went on to say that in some Asian countries, dog meat is considered to be a delicacy. However, if you have been unfortunate enough to watch recent television documentaries on this exact subject, you will have noticed that many of these dogs were not being treated in an acceptable way. It were as though these animals were aware of the fate that awaited them and this provided for a deeply distressing and uncomfortable programme to watch.

These dogs were not being consumed as a result of an unfortunate road accident and no claims could ever be made here that this could be considered as an environmentally friendly practice.

In general, there is often a stigma attached to anyone who tries any other types of meat or foods which are not considered to be the norm in Western societies.

But, upon closer inspection, you would soon see that there are some delicacies associated with some European and North American countries that are just as strange as any Asian or South American choice of edible cuisine.

Other Bizarre Foods From Around The World

It may have been through necessity or a general lack of other foods available within a particular location, but third world nations appear to top the charts with their consumption of the strangest types of foods in the world. This varies from country to country, of course. In Ecuador, for example, piranha fish may sometimes be seen on the menu and in certain Asian countries, they are known to eat a snake’s heart whilst it is literally still throbbing.

Some people will view this as totally abhorrent, especially we reserved Brits, but when you look closer to home, you will soon realise that we have tendencies towards some truly bizarre food choices.

The favourite Scottish delicacy of haggis is a perfect example of one of this country’s national delicacies. As it is made of sheep’s intestines, this does receive some harsh criticism from countries such as the United States.

Taking a look across the English Channel, our European neighbours are able to boast some even more weird and whacky choices. The French are renowned worldwide for their penchant towards frog’s legs and snails, but Spain is able to go far better with their dishes. Bulls testicles are a definite favourite here, along with deep-fried worms and in Italy you can tuck into a winter warming bowl of cow’s stomach soup as a starter, with an entrée that includes tuna heart and even its sperm. Now, you would be hard pushed to beat that one!

Will Food Choices Ever Change In The Future?

As far as the UK is concerned, the short answer to this question would be not for the foreseeable future. As long as the traditional types of foods continue to be available to us, it is doubtful whether we are about to realise a massive shift in the variety of foods that we choose to consume.

Alternative meats and foods have been tried out on the British public, but they have always tended not to do very well. Ostrich meat, for example, was introduced into this country as a healthier and viable alternative to our traditional choices, but it completely failed in the popularity ‘steaks’.

It would seem that the British and most other Western civilisations are accustomed to their comfortable menu choices and do not wish to make any radical amendments any time soon.

Menu choices have changed over the centuries though, including here in the UK. Other types of poultry were far more popular hundreds of years ago and until quite recently, even chicken was nothing like as popular as it is today. Believe it or not, but relatively speaking our most popular meat choice is quite a recent phenomenon.

Squirrel And Chips Or A McBadger Burger Perhaps?

As the British do tend to be very reserved when it comes to their eating habits, it is very hard to believe that people are about to follow Arthur Boyt’s example by taking advantage of the unfortunately well stocked roadkill larder. Whilst you cannot deny that this practice means that the carcasses will provide a select few with definite nutrition, we all realise that it really won’t catch on.

Hell will almost certainly freeze over before you are able to go into a traditional fish and chip shop and ask for the weekly special of grey squirrel and chips with curry sauce. But, worryingly, perhaps one day you may be able to go into a famous fast food store and request a McBadger burger and fries with a Mcpheasant flurry for afters. Let’s keep this quiet and not give anyone any ideas shall we! 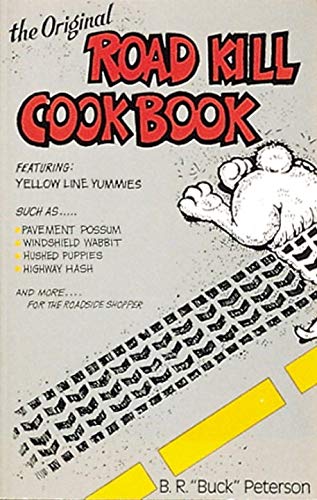 Why not create your own HubPages? It's fun and you can make revenue from Adsense and other revenue streams on your pages. JOIN HUBPAGES NOW - SIMPLY CLICK HERE... (or contact me to write one for you!)