How did Salt and Pepper become a Pair?

Are salt and pepper spices?

Yes and No. Pepper is definitely a spice, but salt isn't. Salt may be the most popular seasoning in the world, but it is not a spice.

According to the chefs' bible "On Food and Cooking: The Science and Lore of the Kitchen" by Harold McGree, the most authoritative book in food and cooking, spices are "bits of dry seed, bark and root." Therefore, a spice is organic.

Black pepper is the small dried fruits and seeds of a tropical vine. So, pepper is definitely a spice.

What about salt? Salt is a mineral. In fact, salt is the only rock we eat. Salt is one of the oldest, if not the oldest, food seasonings. Before artificial refrigeration was invented, salt has been the best-known food preservative, especially for meat, for many thousands of years. Salt is a remarkable ingredient that has had a tremendous impact on human history. But, salt is not a spice. 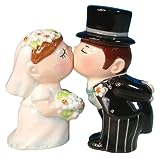 So, how did salt and pepper become a pair?

Salt and pepper have been heavily used as cooking ingredients for hundreds of years, but so were several other spices. So, what made people focus on salt and pepper?

Well, it seems that the story began with salt. Salt had gained popularity as a condiment in Ancient Rome. During the Renaissance period, Italians had been known to serve salted dishes with sugared dishes. By the 17th century, it seemed that the French divided the salt from the sweet. Salted foods were eaten throughout the meal, because salt stimulate the appetite. Sweet dishes were served at the end, as they satiate the appetite and stop our desire to eat.

It is said that it was in France that salt met its inevitable spicy partner, the pepper. In 17th-century Classic French cuisine, pepper and parsley were considered superior to the various other spices imported from the Middle East. The French viewed all spices as vulgar ingredients masking the true flavor of a dish. Pepper was the only spice acceptable. In fact, pepper had attained the same status as fine herbs, which were thought to be more wholesome and exquisite. The French, therefore, are responsible for bringing the importance of pepper equal to that of salt.

And that's how the salt and pepper pair came to be.

If you like this article, will you please let the writer know and/or share this article with your friends. Comments are greatly appreciated.