This is a famous southern food that's especially popular in Louisiana. The main ingredient is called red drum, red bass, channel bass, spot-tail bass, redfish, or simply reds. Whatever you call them, there’s no denying they’re one of the most sought-after fish in the South. They’re fun to catch, as they put up a great fight. They’re also very tasty and play a big part in Cajun recipes. Before this dish became so popular, however, redfish were a nice by-catch, but they weren’t targeted in most areas the way they are now.

Blackened redfish has become a favorite meal with so many people and in so many restaurants, the number of reds has decreased drastically. In most locations, you can keep only one a day, and it has to be a certain size to be legal. In Florida, a redfish has to be 18 inches long but no longer than 27 inches, and you can only keep one fish per day.

No worries, though, if you don’t have a red to cook. You can enjoy this recipe with just about any thick fish that has lean flesh. In fact, I think I actually like the recipe for grouper better than I do for reds!

Melt one stick of butter and pour into a pie plate or similar dish. Dip each fillet in the butter, making sure it’s completely coated.

Remove fish from butter and sprinkle generously with the seasoning mix. Rub the mixture into the flesh.

Heat a black iron skillet on high heat. (See? I told you that you had to have such a pan!) This will take several minutes – you want the pan REALLY hot! It should appear grayish on the inside cooking surface.

Now, turn on your fan and open your back door and windows. Making blackened redfish creates a lot of smoke.

Cook just one fillet at the time. Place it in the hot pan and drizzle one tablespoon melted butter on top. After two minutes, turn the fish over and pour another tablespoon of butter on that side. If your fillet appears charred on each side, you did it correctly.

I like to drizzle my cooked fillets with lime juice.

Read more fishing and Southern cooking articles by clicking the links below the Amazon products: 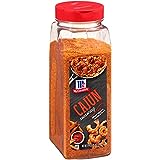 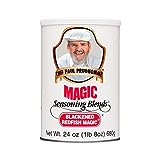 3 stars from 2 ratings of blackened redfish