Caroline is a writer with a passion for great cooking & sustainable, humane food sources.

As the nation's third largest city, the Chicago metropolitan area features a treasure trove of diverse ethnic restaurants: from Indian on Devon Avenue and Italian on Taylor Street to German in Lincoln Square and sushi everywhere. You name it, and somewhere in Chicago, someone serves it. Of course, what we are known for throughout the country is about as American as it gets: hotdogs (Chicago-style, of course); Italian beef sandwiches; and, pizza (Chicago deep dish, naturally).

While other cities serve pan pizzas, folded-over New York style, and national franchise delivery, Chicagoans also have the opportunity to sink their teeth into some of the best pizza in the world. There are two specific Chicago-style pizzas: Deep Dish and Stuffed. Deep Dish is deeper than a pan pizza and layered with cheese, sauce, and other ingredients of your choice. Stuffed pizza is similar to deep dish except it is covered by a crust topping--a true pizza "pie".

While the people of Chicago are united in the their firm belief that their pizza is king, exactly who makes the best pizza in the area is always a matter for discussion. For some, the crust is the deciding factor; for others, the sauce. Some Chicagoans swear by a pizzeria's sausage; others, by the deep dish spinach. Depending on the ingredient nearest and dearest to your heart, your favorite Chicago pizzeria may be different than your neighbor's.

Whatever your preference some of the best pies are found at the following Chicago restaurants.

Sadly missing from the list in 2016 are long-time far North favorites Burt's Place, Carmen's, and Edwardo's. Burt's Place, a tiny location in Morton Grove, was featured on many national food and restaurant shows, including Anthony Bourdain's "No Reservations." Burt Katz, the unique individual who owned and operated the restaurant, along with his wife, was involved in the pizza business for more than 52 years and famous for his carmelized crust and sauces. He closed Burt's Place due to health reasons and passed away in April 2016 at the age of 78.

Carmen's, the first taste of Chicago deep dish for many Northwestern and Loyola students, is now but a memory. Edwardo's, which featured a delicious deep dish spinach, has all but disappeared from Chicago.

Lou Malnati got his start making deep dish with his father Rudy at Ike Sewell and Ric Ricardo's Pizzeria Uno. Lou and his wife opened their own shop in 1971, in the near-north suburb of Lincolnwood. Now in its second generation of family ownership, Lou Malnati's deep-dish crust is ranked one of the best among Chicago pizza lovers: flaky, buttery, and bready. Lou's deep dish sausage is consistently ranked on popular "best of" lists, and the Lou's Special, a blend of tomato, spinach, and mushrooms, will please deep-dish loving vegetarians. For Chicago natives who have relocated throughout the country, you can order your Lou's and other Chicago specialties off the Lou's website, loumalnatis.com.

Many locations throughout Chicago and the suburbs, including:

The late Burt Katz of Burt's Place developed his special caramelized crust at Pequod's. For the caramelized experience, but without the "ambiance" that was Burt's, check out Pequod's in Morton Grove and Chicago. Pequod's enjoys a loyal following from both its local neighborhood customers as well as pizza aficionados. It is well known for a cheese coating applied before cooking, resulting in beautiful golden, crisp crust with carmelized edges. In addition to its unique crust, pizza fans love its fresh toppings--especially the pepperoni--and the chunky sauce.

Life-long Chicagoans consistently rank Pizano's as one of their favorite deep-dish and thin-crust, despite the lengthy wait times. The deep-dish is known for its density--so dense one slice fills a starving teenager. Crust comments include "buttery" and "flaky", and the sauce is referred to as "robust" and "flavorful."

Founded by another son of Rudy Malnati, Rudy Jr., in 1991, Pizano also offers nationwide delivery for relocated Pizano pizza fans. Its two downtown locations make this a popular lunch and after-work stop. A Glenview location is great for the family.

Palermo's has been dishing up the deep-dish to Chicago pizza lovers since 1961. It's known for an amazingly sweet sauce, and its sausage and mushroom deep dish is highly recommended by Chicago food critics. In addition to its stuffed, deep dish and thin crust pizza's, Palermo's also offers a lengthy Italian menu, including homemade sausage and fresh-cut veal. This is the only restaurant I've ever seen to actually advertise "Funeral Packages" on a main website page.

Founded in 1974 by two brothers from a small town near Torino, Italy, Giordano's features a secret family recipe that’s been passed down through the generations. The brothers modified the recipe slightly for Chicago taste buds and their stuffed pizza was created. Popular choices include The Special, which is made with sausage, mushrooms, green peppers and onions, and the Spinach with mozzarella and Parmesan cheese.

With 55 locations, including a few in Florida, Giordano's is, like Uno, close to becoming a franchise.

Known throughout Chicago for its décor, Gulliver's offers thin, stuffed and "World Famous Pizza in a Pan" (deep dish)--as well as a large menu featuring Italian entrees, sandwiches, appetizers, baby back ribs, quesadillas and half a chicken. Gulliver's offers the standard Chicago-style ingredients but also gives you an array of stuffed, thin and pan options, ranging from bacon and pineapple to artichoke hearts, salami and eggplant.

Operating since 1965, the West Rogers Park restaurant has a huge delivery area, including Rogers Park and other North Side areas, Skokie, Evanston and Lincolnwood. But to truly understand Gullivers, you need to actually go to Gulliver's and experience their interior (and exterior) decorations, which is mostly an eclectic menagerie of Victorian and Art Nouveau antiques--especially chandeliers.

The Art of Pizza

The crust is why pizza lovers rave about the Art of Pizza: crisp on the outside and doughy on the inside. Other positive reviews include references to the perfect crust-to-cheese ratio, and Time Out Chicago claims it's the sauce that makes the pizza here.

Vegan deep dish? Yes, Chicago has that. The best, according to Yelpers, is found on Wednesdays only at Kitchen 17 in the Lakeview neighborhood and gives vegans a chance to chow down on a lifestyle-friendly version of the Chicago deep dish pizza.

If you live in Chicago, you probably have very strong feelings about these pizza palaces and may only patronize them when you have out-of-town guests visiting.

If you are a visitor to Chicago, you should definitely add one of the above to your list of possible pizza experiences. They all maintain that old-world charm at their original locations in the downtown area, making them easy to access after a day of museum hopping and Michigan Avenue shopping. 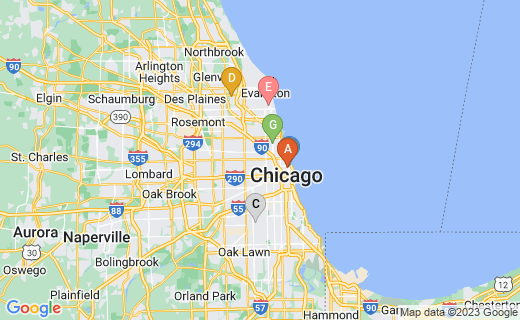