Forscher - One Knife That Does It All

With 7 years experience as a meat cutter and meat department manager, I have learned every aspect of cutting and selling meat.

Why purchase an entire set of knives when you can buy one knife that will do the job of all the other knives combined?

You may have already spent way too much money for the 14 piece knife set and will possibly spend more on another knife set down the road either for yourself or someone else. As an experienced meat cutter of seven years, I have used every knife one could possible use to cut meat, vegetables, fruit, and just about every other kind of food you can think of. From my experience, I can tell you that buying this one knife will be the greatest kitchen investment you ever make. 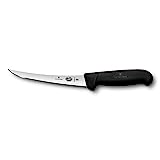 The biggest mistake that most people make when buying kitchen utensils is buying an 18 piece knife set. Most people think they are getting a great deal if they buy an 18 piece set and are only paying $100, but they are falling for one of the oldest tricks in the book.

One of the most used strategies in marketing is offering items in bulk. The reason this strategy is so effective is because many people are just not that good at math or aren't aware that they could get a better deal by mixing and matching items. For example: If I tried to sell you one knife for $25 or a whole set of 10 knives for $35, your mind would probably tell you to pay ten more bucks and get nine extra knives. What most people don't take into account is the actual value of those additional nine knives. This strategy is used for a variety of different items other than knives. Believe it or not, the companies that use these types of strategies are actually making more money off of the bulk item. Bulk items usually contain 1 or 2 good pieces. The rest of the included pieces are cheaply mass produced and usually made of lesser quality materials. So, while you see one knife costing $25, it may actually cost the company $20 to produce it. The other nine knives that you are paying only ten more dollars for are probably only costing the company 50¢ each to produce. While this may not seem like much of a difference, consider that the company is only making $5 off of the single knife, but are doubling their cost of production on the other nine knives.

Now that that information is on the table, let me show you how you how you can buy one knife that will take care of all of your culinary needs and purchase a set of higher quality steak knives than what you would normally get from a $100 set.

The only knife you will ever need is the Forschner/Victorinox 6" Curved Boning Knife.

For those of you unfamiliar with meat cutting or working in a meat department, Forschner is to knives as Google is to search engines. Most meat cutters prefer them and for good reason - they are durable.

Don't get me wrong, there are other good knives out there that can do their job as well as the Forschner 6" boning knife, but they aren't as versatile. I would estimate that I have used around 50 different styles of knives and this particular knife trumps them all. The reasons this knife is superior to the rest are as follows:

Caring for your knife

As a meat cutter, I usually go through one of these knives each year, meaning I cut with it until the blade looks like an ice pick. That's how long the blade lasts! You can keep re-sharpening is until is it virtually gone. Having said that, I would recommend buying a wet stone or other knife sharpener.

Possibly the best tip I can give you is to sharpen your knife on a weekly basis. If you are cutting meat on a daily basis, you may want to sharpen it more often. However, you probably won't have to sharpen this knife until 3 or 4 weeks after first use.

The second best tip, but equally as important is to keep the knife protected. This knife usually comes with a plastic sleeve that the blade slide into. I always tried to keep mine, but eventually lost them, as I'm sure most of you will also. After I lost the sleeve I would just wrap the blade in saran wrap to protect it from butting up against other utensils and dulling the blade when it was not in use.

And finally, the last portion of this article is about steak knives. I never quite understand why people have 20 steak knives. Do you expect to have that many guests using steak knives? The average American family is made up of four members, thus meaning 4 knives will almost always be enough. I'm not saying that you can't buy however many knives you want, but consider the amount of space they take up.

I said that so that I can say this - I recommend 4 piece steak knife sets. There are a lot of high quality sets, each varying in price. I'll leave it up to you to decide the quality you think you need based on the amount you will use them. My favorite sets are as follows:

After all is said and done, five knives is usually all one family needs. You can buy these knives for less than $60 in all or cheaper if you decide to go with a less expensive steak knife set. As a general rule of thumb, decent quality steak knives are probably going to cost around $4 each. If you pay less than that you are, more often than not, getting a lesser quality. If you do decide to get one of these Forschner knives, leave a comment and let others know what a great knife it is.