Issues with Being a Fast Food Nation

Do You Want Lies, I Mean Fries With That?

How We Became a Fast Food Nation

Over the last three to four decades, fast food has infiltrated every nook and cranny of American society. An industry that has begun with a handful of small hot dog and hamburger stands in the southern part of California has spread to every corner of the nation, in fact, every corner of the globe.

Today, fast food is served at airports, drive throughs, stadiums, movie theaters, malls, theme parks, K-Marts, Costcos, the list can go on and on and on. Fast food is everywhere. It is cheap, it is convenient, and we are ransacked with messages on a daily basis that fast food is our best option.

Fast Food Has Infiltrated Every Society

One of the sickest parts about the fast food industry is that these companies don't target adults, they target children - innocent children.

The explosion of marketing towards children started in the 1980s, when the economy was booming and both parents had steady jobs. Because both parents were working, they started feeling guilty for the lack of time spent with their children, so they spent money on them instead.

As televisions became more popular, more and more companies started to target their advertisements towards children, knowing that they were the most susceptible. Fast food chains, in particular, spend over $5 billion a year on advertising for television alone. But their target of children extends far beyond the tv.

Worse than the playgrounds are the "Happy Meals" offered by McDonalds. The fast food industry has forged promotional links with the nation's leading toy manufacturers so that they can give away toys with their meals. Companies track toy trends so that they can use the most popular toy amongst children to lure families into fast food chains.

The fast food industry doesn't just partner up with the countries largest toy manufacturers - they are also aligned with sports leagues and Hollywood studios. America's fast food culture has become indistinguishable from America's popular culture of its children.

The Dark Side of Fast Food

Does Your Family Eat Fast Food? If so, How Often?

Behind the Counter of Fast Food Chains

During a conference on foodservice equipment in 1999, top executives from some of the biggest fast food franchise got together to discuss the issues of labor shortages, employee training and kitchen technology. They discussed who the ideal employee would be for their fast food establishments, and decided that absent-minded, "ordinary" folk were the industries best target.

They made their equipment "easier to use the right way then to use the wrong way." With no concern for the well-being of their employees, these companies provide minimal training, pay close to nothing, and take advantage of America's most disadvantaged citizens.

In other mass production industries ruled by the assembly line, labor unions have gained workers higher pay and fairer treatment in the workplace. In the fast food industry, part-time jobs, high employee turnover rates and the marginal social status of their employees has made unions impossible. Because of this, managers are able to offer their employees wages that are impossible to live off of, and ignore complaints about poor working conditions.

While the fast food industry targets children as their main consumers, they target uneducated teenagers with no other options as their ideal employees.The work is boring, monotonous and gives employees time to socialize amongst themselves. The fast food franchise currently has 15 year olds working twelve hour shifts and high school sophomores working til closing (meaning they don't finish up until after 2 in the morning).

This book is extremely eye-opening, exposing the dangers of our country's heavy reliance on fast food. After reading this, I definitely think twice before makin 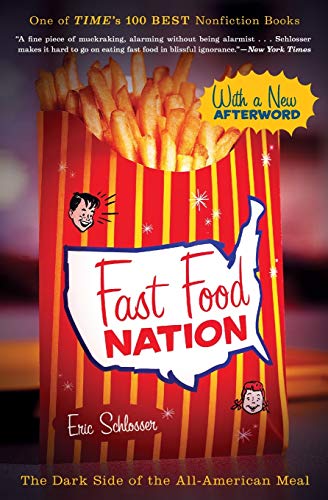 The Dangers of Working at a Fast Food Chain

Not only is the job of a fast food franchise employee boring and monotonous, it is also dangerous. The injury rate of teenage workers is twice as high as adult workers. More often than not, these injuries occur within the fast food industry.

The most common injuries employees experience on the job at fast food franchises include slips, falls, strains and burns. However lack of money spent on security makes these establishments prime locations for robbers. During 1999, more fast food workers were murdered in the United States than police officers.

The restaurant and fast food industries have continued to fight not only guidelines against workplace violence, but also against any regulations or enforcement from OHSA. The industry focus has always been to employee workers for the most marginal wage possible, and to create food that would net the highest profits possible.

This is an industry that cares only about their profits, and disregards their workers.

We Are a Fast Food Nation

A Nation Dominated by Scientific Socialists

Over the past couple of decades, the United States has swung too far in one direction, weakening the regulations that protect workers, consumers, and the environment. The profits of the fast food industry have come at the cost of the rest of society. The collapse of communism has led to an "Americanization" of the world - a world wide economy entrenched in American engineered fast food.

The Dangers of Eating at Fast Food Chains

A study by the CDC recently showed that obesity is a growing problem in every single state across the country. With tens of millions of Americans classified as obese, a quarter of that population qualifies as "super-obese" - weighing at least 100 pounds more than their ideal weight.

We live in a fast paced society, and as families eat more and more meals outside of the home, they consume more calories, fat, sodium, and far fewer nutrients than they would if they ate at home.

The cost of America's obesity epidemic extends far beyond our waistlines. Currently, obesity is battling smoking to be the leading cause of death in the United States. The CDC estimates that around 500,000 Americans die every year as a result of their weight.

Fast food leads to weight gain, cholestoral problems, blood pressure issues, and more. The healthcare industry spends hundreds of billions of dollars every year dealing with obesity. Add to that the $100 million that Americans spend each year on weight loss pills, dieting fads and exercise equipment, we have become a nation addicted to food and weight.