Mark Twain once said, “Too much of anything is bad, but too much of a good whisky is barely enough”. Any true whisky connoisseur will tell you that Scotch whiskies are king, but in recent years, distilleries in regions across the world have been refining their techniques and producing some superb examples of this amber ambrosia. The following is a list of some of the world’s best whiskies on the market according to the 2011 results of various international whisky competitions.

Indisputably one of the best single malt whisky distilleries in the world, Glenfiddich consistently wins prestigious industry awards for their rich, multi-layered Speyside Scotch whiskies. The newest 40 Year Old single malt release won gold at the 2011 International Spirits Challenge for its heady blend of dried fruit, marmalade, dark chocolate, roasted coffee, hints of leather and wood smoke. With only 600 bottles released, this sultry Scotch is extremely limited, but if you can afford it, it’s well worth the hunt.

Another reigning king of Scotch whiskies, Highland Park has been producing award winning single malt whiskies from their scenic Orkney Island distillery since 1798. Winner of the Chairman’s Trophy, and lauded as an ‘extraordinary ultimate recommendation’ at the 2011 Ultimate Spirits Challenge, the 18 Year Old Single Malt has what Master Blender Gordon Motion describes as “a balance of peat and sweetness”, with an aromatic nose of dry cereal, light spice and smoke and intense flavours of sweet toffee, honey, smoky peat and toasted malt. And as one of the Master Blender’s favourite whiskies, it’s sure to please both novices and experts alike.

This distinctive, rare edition from Glaswegian distillery Whyte and Mackay is unique in that it contains 70% malt and 30% grain, an unusual ratio for most whiskies, but one that adds depth and richness to the blend. The 40 Year Old Blend has a full bouquet of vanilla, chocolate and leather, and Master Blender Richard Paterson describes the flavour as containing hints of, “Spicy orange liquorice and crushed fleshy peaches”, as well as an aftertaste of “Java coffee and bitter almond chocolate.” With such a full aroma and rich, smooth taste, it is no surprise that the 40 Year Old Blend won a coveted gold medal at the International Spirits Challenge this year.

As the biggest name in Irish whiskey, Jameson has a solid reputation to maintain. The Rarest Vintage Reserve raises the bar with its complex marriage of rare whiskeys, some aged over twenty years. One of Jameson’s techniques is to mature the whiskey in Port wine casks, which adds additional layers of flavour to the blend. The effect is a powerful but balanced taste, reminiscent of dried plums, black currants, chocolate and barley. This exceptional blend wowed judges and bagged a double gold medal at the San Francisco International Spirits Competition and a gold medal at the International Spirits Challenge.

If international accolades are anything to go by, Japanese whiskies have entered a golden age, and Nikka Whisky is no exception. In 1934 Masataka Taketsuru opened the first Nikka distillery in the snow-capped mountains of Hokkaido, Japan and started producing the rich, oaky whiskies that are now overtaking their Scottish counterparts in worldwide competitions. The namesake Taketsuru Pure Malt 21 Years won this year’s World’s Best Blended Malt (Pure Malt) Whisky title at the World Whiskies Awards for it’s signature aromas of sweet oak, wheat and peaches and its sophisticated palate of ripe fruit, aged oak, ginger spice and black pepper. With the same level of complexity as a Scotch whisky, but a notably different flavour, Taketsuru 21 Years is a fine example of world-class Japanese whisky.

Japan’s first and oldest whisky distillery, Suntory Yamazaki is located amidst rolling green hills, and fresh gushing springs which contribute to the unique flavour of their world acclaimed whiskies. Pure spring water and Japanese oak barrels lend a distinctive and memorable taste to the Yamazaki 1984 Single Malt, which pulled in not just one, nor two, but three accolades this year. Judges at the World Whiskies Awards pronounced it the World’s Best Single Malt Whisky, and the rich, buttery undertones of sandalwood, spicy oak and tobacco earned this characteristic crowd pleaser a double gold medal at the San Francisco World Spirits Competition and a gold medal at the International Spirits Challenge.

Another favourite from Suntory, the Hibiki 21 Year Old was named the World’s Best Blended Whisky at the 2011 World Whiskies Awards and prompted Dave Broom, whisky expert and chairman of the judging panel to remark that ‘this was the highest quality final round we have seen yet in the WWA.” This golden amber blend has pleasing aromas of oranges, pears, bananas, leather and coffee, and a full, rich palate of Christmas spices, blueberries and cigar leaf. Add a long, fruity finish, and it’s easy to see why this Japanese gem consistently gets rave reviews, and is giving the traditional Scotch favorites a run for their money.

A relative new comer to the world whisky scene, the nineteen year-old Lark distillery was named Whisky of the Year at the International Whisky Competition for their single malt, single cask whisky. All bottles were drawn from a single first-fill Port cask, meaning that the residual flavours of Port and rich wood have infused the whisky and added to the sweet smoky taste and undertones of tropical fruit and brown sugar. The distillery attributes the sweet, deep flavour and high quality of their whisky to the pure water, ideal humidity and rich peat of their home in Tasmania.

This 130 year-old distillery on the island of Islay is unique in that, unlike the majority of Islay distilleries, they do not use large quantities of peat in the production process. The Bunnahabhain 18 Year Old relies instead on its clear amber hue, bouquet of honeyed nuts, toffee, and leather, and rich buttery palate with a light touch of wood, caramel and brine. In addition, many Scotch whiskies are chill-filtered, meaning they are chilled to nearly freezing point and filtered to remove impurities. By using a natural unchillfiltered method, Bunnahabhain ensures nothing is taken away or added to the whisky. With a rich but subtle taste evocative of its maritime roots, it’s easy to see why the 18 Year Old single malt earned a gold medal at the 2011 International Spirits Challenge.

Lagavulin, distilled on the beautiful island of Islay, has long been a darling of whisky aficionados the world over for its full-bodied, smoky, peat-heavy character. The 16 Year Old Distiller’s Edition won an impressive double gold medal at this year’s San Francisco World Spirits Competition. Fans of the robust single malt gush over its intense flavours of dark chocolate, sweet oranges, peppery smoke, seaweed, and of course peat, and whisky experts consistently refer to it as a powerful, but smooth, classic Islay single malt, with just a touch of the sea on the finish.

All whiskies start out the same way, a simple mash of grains that is fermented, distilled, and aged in oak casks. But it’s the blending process that determines the whisky type. The term ‘single malt’ means that the blender has chosen to combine whiskies from the same distillery and of the same grain to make a distinctive flavour combination. Blended whiskies are whiskies blended from different distilleries and perhaps different malts and grains. And cask strength whisky is whisky that is bottled directly from the cask with little to no dilution. Many bottles also display a year or ‘vintage’. This refers to the youngest whisky used in the blend. Whiskies with older stock tend to be more expensive due to their complexity and rarity. For novices looking to purchase a high-end whisky, Master Blender for the Edrington Group (home to The Macallan, Highland Park and Famous Grouse whiskies), Gordon Motion suggests, “As they are likely to be spending a considerable sum then go for a trusted brand from the distillery owners. Research via whisky writers can often lead the way on safe purchases. If buying from an independent bottler, again aim for the well-known names as they have a reputation to uphold.” 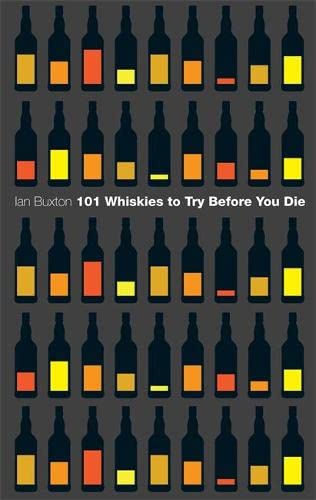 101 Whiskies to Try Before You Die
Buy Now

Straight up or on the Rocks?

Although whisky purists may insist on drinking whisky straight up with just a drop of water, there is nothing quite like a chilled glass of amber scotch or honey-coloured Irish whisky. The only problem is that ice cubes eventually melt, diluting the whisky in the process. Fortunately, there is a solution. Whisky stones are natural products that chill the whisky in your glass without watering down the drink. Stainless steel cubes work in the same way. In addition, there are moulds that can create spherical ice cubes, which melt at a much slower rate than ice cubes.