Indonesian food is richly flavored and tasty with its various spices. Sure, it’s not as popular as Italian, Western, or Japanese cuisine but you should try it once in a while! It tastes delicious and there are a lot of choices! Especially for those who love spicy. You will not regret tasting it. Want to try it? Here’s the list of top 10 Indonesian food recommendations. Just a little tip though, it’s better if you eat from shops or carriages on the street. It’s tastier. But I can’t guarantee that you won’t have stomachache. Foreigners tend to have stomachache after eating it the first time.

Have you ever tried Indonesian food before?

A lot of foreigners love sate ayam or chicken satay. It’s basically chickens that you grill with peanut sauce. Trust me, it tastes good and juicy. The peanut sauce compliments the meats nicely. You can add chili sauce as well if you want something spicy! Don’t forget to squeeze the lime before eating it. You can eat it with rice or just eat the satay without rice!

It’s one of the favorite among Indonesian students! In Indonesia, we call it mie ayam. It’s basically a bowl of noodles with chicken meat and vegetable on top. There will be a bowl of chicken broth soup but it’s served separately. You can choose to add it in or no. I personally don’t like adding it but lots of people love adding the soup. People’s tastes differ after all. You can also add dumplings or meatballs if you want to. Of course it will cost more though. But don’t worry, it won’t make much differences. You can also add the chili sauce. Hmm, the spicier, the better. Interested to try it?

Nasi Goreng or fried rice is a popular dish in Indonesia. Fried rice is basically everywhere around the world but you won’t forget the taste of Indonesia’s fried rice! Fried rice is rice fried with high level heat. Usually, there will be eggs, vegetable, garlic and if you want to, you can ask the chef to add some spicy stuff. Here’s a little tips and you won’t regret it. Go eat Indonesian fried rice at the carriage you find on the street. It tastes better. Also, it’s cheaper! It costs around $1 - $1.3 or Rp10.000 – Rp15.000. That is, if you eat on the street. Don’t expect to get that kind of price in restaurants.

Nasi Padang or Padang rice in English originated from a place called Padang in West Sumatra. Still, you don’t have to go to Padang to eat it. You can find it nearly everywhere in Indonesia. That’s how popular Padang food is. There are various dishes from Padang which you can eat with Padang steamed rice. The dishes include fried chicken, rendang, and a lot more. It’s richly flavored with various ingredients Padang food is made of. Upon sitting on the table, the waiter will bring a lot of dishes you didn’t order. But fear not, the waiters are not asking you to eat all of it! You can pick what you want to eat. After you’re done, the waiter will calculate what you’ve eaten and pay accordingly to the amount of food you’ve eaten.

Indonesian people usually eat this during breakfast. It’s not your regular porridge. There are crackers, chicken broth soup, chicken meat, peanuts, and leek atop the porridge. Oh, and the same applies to bubur ayam, as the dish is called in Indonesia. Like fried rice, it’s better to buy it from the carriages on the street. Usually the seller sells the porridge during the morning. It’s tastier. Besides, it’s cheaper. If you buy it on the street, the prices range from Rp10.000 – Rp15.000. If you were uncomfortable eating on the street, you can just take it away and eat it in your hotel room or something.

Kuah bakso or meatballs soup are popular as well. It’s very delicious. Like chicken noodles, it’s students’ favorite lunchtime meal. For those who love spicy, add the chili sauce! Your mouth will feel like it’s on fire. I know I’ve said it many times before but meatballs soup is one of the dishes I would recommend buying from the street as well. The price is about the same as chicken porridge or fried rice if you buy it from the street. You see, street food in Indonesia taste more local.

Soto is a soup that contains broth, meat and vegetables. Sometimes, you will find angel hair as well. It depends on the type of soto you’re eating. There’s soto ayam (chicken), soto betawi (Jakarta’s soto), and a lot more. It’s different from city to city. The taste is different as well. My personal favorite is soto mie. A soto with noodles in it. There are two types of soup: with or without coconut milk. It’s up to you which you’d like.

Siomay is an Indonesian traditional food. Siomay is a steamed fish dumpling with peanut sauce. It’s similar to shumai from china. It originated from shumai after all. Perhaps, the meat is changed to fish because the majority of citizens in Indonesia are Muslim. Muslim doesn’t eat pork. Aside from fish dumplings, you can eat potato, tofu, cabbage, and egg. The most popular siomay in Indonesia is Siomay Bandung.

Sundanese are the race of people in West Java. The cuisine consists of grilled and fried carp, tempe, tofu, chili sauce, fried or grilled chicken, and a lot more. It’s best to eat with bare hands. But of course, if you were uncomfortable with it, you can eat it with cutleries. For this type of cuisine, I suggest you to eat at restaurant.

This is some kind of salad with peanut butter! If you haven’t noticed, lots of Indonesian food used peanut butter. Its origin is from West Java and gradually, it became Jakarta’s street food. It’s composed of various vegetables from cucumbers to bean sprouts. Oh, you can request how many chili you want! Adding crackers are recommended.

Here’s a little bonus for you because we can’t miss this, right? 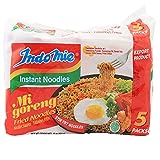 Yes, it’s instant noodles which are the reason why I included it in the bonus. It’s very popular though. It’s delicious too. There are various types of indomie, from chicken broth flavor to fried noodles flavor. It tastes good even though it’s instant. In Indonesia, people usually eat it during the end of a month, especially college students. You see, they are in a pinch so eating instant noodles is one of the ways to survive.

So, those are the food you must definitely try in Indonesia! There is more food in Indonesia that is delicious but that’s for another time since it’s a top ten. Don’t forget to try Indonesian food I recommended above if you ever travel to Indonesia!